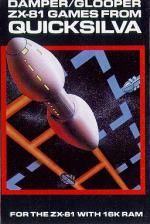 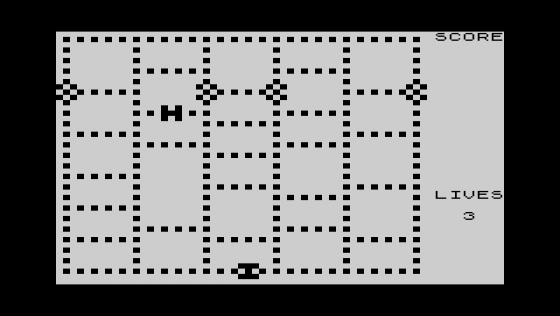 I didn't find the blurb for this program very helpful in understanding the game, in spite of the writer's vivid imagination; but the game itself was better.

Damper puts you in a city on an alien planet; mysterious black blobs are attaching themselves to the power cables, moving around the grid and sapping the city's power supply. Your job is to move a grid runner around the wires, damping down the power while avoiding the aliens.

The game loaded and ran with no problems; there are optional instructions displayed at the start of the program.

There are five 'dampers' for you to avoid; they move in an irregular wave up and down the grid, and if your timing is not precise it is very easy to get caught!

The graphics are clear and the controls are quick without being over-sensitive. You have three 'lives' (plus bonus if you become good at the game) and the speed increases as the game progresses.

Scores are displayed, and at the end of each game there is a 'hall of fame' display; the players with the highest scores may enter their names. There is also a facility for saving the game.

I found Dampers a straightforward game, without frills, but with enough difficulty involved to prevent the player from becoming bored - every time I thought I had the knack of avoiding the 'dampers' I managed to get caught.

Glooper is a relative of Quicksilva's Munchees, fun to play and competently produced.

Dampers is a straightforward game, without frills, but difficult; Glooper is fun to play and competently produced.