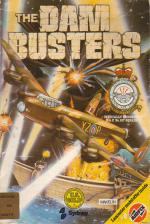 The Dambusters, the well known film classic depicting the bombing raid on the dams in the German Ruhr Valley by the heroic 617 Squadron, is now a computer game.

In the game you take on the roles of navigator, rear and front gunner and the bouncing bomb dropper all at the same time. Which, as soon as you reach hostile airspace over Europe, turns into a chaotic battle just to keep your aircraft in the air - all thoughts of actually successfully bombing the dams leaves you mind completely. Controlling the plane with enemy plpanes zooming in from all directions and gun emplacements trying to blast you out of the sky is quite enough to contend with.

The pilot's controls are quite complex and need thorough use to get you accustomed to using them during the game. Though, for the most part, I left the more "serious controls" alone.

There are three levels of play. The first involves you manoeuvring your aircraft across a runway and taking-off. The second starts the game with you at the controls of the plane flying over the English Channel. The third places you over the Ruhr Valley on a practice bombing-run without enemy fire to distract your concentration.

Dambusters is basically a shoot-'em-up and not a flight simulator. Though that is no disgrace and the game is well worth buying.

Dambusters is basically a shoot-'em-up and not a flight simulator. Though that is no disgrace and the game is well worth buying.