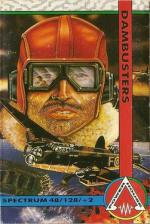 Don't get me wrong. By all accounts The Dambusters was a very good film, it's just that I don''t think it's the perfect choice of film to licence.

In Dambusters, the game, you play the pilot in that historical bombing run with the infamous bouncing bomb. And the front gunner. And the rear gunner. And the navigator. And the (OK Tony, we get the picture - GT). You have a variety of screens to look at, each concerning different parts of the plane.

The game is hard. I'm glad to say, I'm happy about that. I hate games that are walkovers, but to be honest, this is something different. The screens have warning systems, so you do know when to look at them, but they do have a tendency to all go off at the same time. Frustrating but true. Add to that the poor sound and the lame playability, DB doesn't add up to much.

Poorly thought about re-release of a trashy licence. A clanger has been dropped.

Poorly thought about re-release of a trashy licence. A clanger has been dropped.