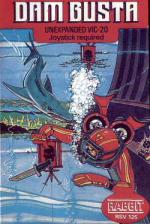 No memory expansion and a two-screen game usually spell boredom for the games-reviewer. But surprise, surprise - three hours later and I was still glued to the screen, upsetting the office with frequent howls of frustration.

Dam Busta is an underwater demolition game. A frogman has to plant three bombs in the wall of a dam and escape before they explode.

On the first screen he has to swim from top-left to the exit through the rocks at the bottom right. The water is 'barracuda infested' - if these creatures seem to resemble overgrown tadpoles more closely than fish, then you must remember that this is a program for the unexpanded machine.

Your frogman is well-animated and you can easily discern his aqualung on the back of his stylish red wetsuit. He's armed with aharpoon and is pretty nifty at pronging the barracuda. His real problem is that he only has 60 seconds of air to complete the whole mission, so he has to continually surface to stock up with the breathable.

Once through to the second screen, his task becomes very difficult. Here the fish are arranged in a tight, phalanx-like formation and fire their own harpoons. But if you can blast the boss barracuda in the third rank they become stationary and let you get on with your job.

Even more troublesome is the helicopter which comes whizzing over and bombs you - usually before you get anywhere near the dam to plant your bomb. If you do manage to leave a bomb, you still have to get back to the base before your air runs out and then do the whole business twice more.

Dam Busta is a compelling game, mainly because time is tight and the hazards are so tricky. The playability is well-supported too, with a display of quite nifty graphics and sound.

A compelling game, mainly because time is tight and the hazards are so tricky.
Logout