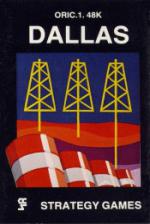 Despite being loosely based on the TV programme of the same name, this game has no fast-moving deals, requires little financial skill, and failed to provide much excitement or enjoyment.

The program is recorded twice on the cassette, at fast and slow speeds. Despite several attempts, the program failed to load at the fast baud rate. At the slow rate, the program loaded with several errors. These errors I had to correct manually to allow the game to be played.

The aim is to try to make a large profit in the oil business by buying plots of land, drilling for oil, [text missing]

A balance sheet and information on cashflow are displayed on the screen to help you with your decisions.

There are several bugs in the program (e.g. pressing an alphabetic key when a numeric input is required is not rejected).

In business terms too, I felt the game was ill-judged.

There are several bugs in the program and, in business terms too, I felt the game was ill-judged.