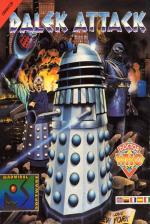 Chris 'Tardis Trousers' Hayward cares more about nurses than doctors, but the thought of fighting laser-wielding dustbins is enough to make anyone grab a sink plunger and become a Timelord.

For many years, mankind has striven to communicate with alien intelligence. So far the only results have been multi-million dollar movies and dubious corn circles of which the farmers deny all knowledge (though they're all too eager to collect money from Japanese tourists) Real alien forms are a far cry from the cutsey ET expectations of the human race, because what really lurks in the depths of the cosmos is a cruel, callous race of metallic megalomaniacs, the dustbin-cloned Daleks. The earthlings are quite unaware of the evil breed's intentions (conquering the universe, exterminating all life, etc) but way up in the stars a meeting of the Timelords is under way. One man volunteers to put an end to the Dalek's reign at terror; Doctor Who!

Ol' Who is not your normal, run-of-the mill GP, but a time-travelling do-gooder who always attracts female assistants - and transforms into a completely different person every time the lead actor demands a pay rise! You control both the Doctor and his assistant (one each in two player mode) and must wipe out the meddlesome mutants from various Earth cities as the Daleks begin their invasion. Free each city and it's onto the planet Skaro to defeat Davros, the twisted, malevolent leader of the Dalek force. Occupied London is Who's first stop - using a pair of hover pads, the duo must enter the Dalek-dominated city via the sewers, speeding through the tunnels, rescuing imprisoned humans and blasting vicious Rabomen, Orgons and the rest of the hostile bunch. This first stage is a horizontally scrolling shoot-'em-up which is odd really. 'cos the other levels are of a platform nature where you must roam around different cities, freeing the captive public and collecting power-ups to destroy the Daleks. Play switches between the Doctor and his assistant each time one ducks into a building or loses a life, or alternatively by a quick smack on the space bar.

The Daleks used to scare the buzzards out of me all those long years ago, and the Doctor Who license is meaty material for a stunning game. As expected. though, Dalek Attack ain't quite what it ought to be. The first level is not particularly good: a silly shoot-'em-up with the Doctor wobbling around in a shopping trolley.

Thankfully the remaining stages are much better, leaping around on roof tops and swinging about on drainpipes. The hostages must be rescued before entering the next level, so every nook and cranny needs exploring.

The Daleks are impossible to kill with the normal gun, so look out for the laser and grenade power-ups. The two player interaction's novel but switching between players results in a lot of confusion. Just when you figure out where your character is, you get fried by a Dalek.

On reading the instructions, you think the features are really dandy. but half don't seem to appear! I scanned high and low to find K9 but the cybernetic mutt must've wandered into orbit - he's Certainly not in the eight-bit version. Also promised is a search indicator, apparently revealing unseen objects, but did I find any? Did I Bonnie Langford?! After all, this criticism, Dalek Attack still climbs from the pile of verbal abuse and lifts its chrome dome above the rest.

I get the impression this is only the beginning at a Doctor Who game series (surety they wouldn't leave the laughable Cybermen out of it?) because with a teaspoon more thought, any sequels would be something to watch out for!

Datek Attack isn't perfect by any means, but it's certainly got a lot going for it. The graphics are clear and crisp, it's nicely presented, and with live long levels you won't be finishing it in a hurry! The end-of-level guardians are also impressive, as are the silky-smooth controls.

On the negative side, there's nothing here we haven't seen before, and I can't help feeling more could be done with the license. For all its lack of originality though, It's well executed and pretty playable.

Congratulations to Admiral on launching a full-priced label without charging over a tenner a game - games of this quality at these prices should be encouraged. Nice one, guys!

No, it's not possible! Surely not even the dastardly Davros is low enough to waste a great licence by putting out a fourth-rate scrolling shooty... (after making it past the first section) - phew! The game, in fact, is a very large and rather difficult map-'n'-search-'em-up with plenty of Daleks and other baddies to keep you on your toes.

Commendably, the programmers haven't simply chucked out a slap-dash program that plays like it was put together in twenty minutes, knowing it'll sell solely on the strength of the name. Dalek Attack is a well thought out and challenging arcade adventure, and a real winner in the testability stakes with heaps to see and explore! This one should find its way into any self-respecting C64 owner's game collection. Pity about the silly first level though...

Sound 82%
A damn fine rendition of the Dr. Who theme

Lastability 77%
The fresh ideas go stale after a while

A well thought out and challenging arcade adventure... heaps to see and explore! Should find its way into any self-respecting C64 owner's game collection.