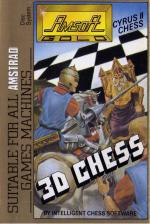 Intelligent Software used to produce pretty good chess software for the Spectrum. They then stopped and spent a few years developing the Enterprise computer. Cyrus Chess II looks like a comeback for their chess-writing arm.

The main feature of this game is its Psion Chess-type 3D graphics. Psion say that their chess program was developed on a Vax 11/750, I don't know what Intelligent developed their chess program on, but the graphics certainly look as good. Indeed, they look better because the Amstrad has more colours available so that the pieces look a lot more realistic.

As far as options go, there is all the usual ones that you would expect such as nine levels from two seconds to two-and-a-half minutes thinking time with three special levels, removes, swap sides, analysis, save game, play both sides, hint, printer, selected promotion, two human mode, and lots of other functions in these.

The graphical display is excellent as you can see from the pictures here, the pieces move slowly, but then chess players are not normally renowned for their incredible lightning fast reflexes!

As well as the perspective graphics (well, the board is in perspective, but the pieces are all the same size, wherever they are), there is the alternative of a normal plan view type with diagrammatic graphics with notation and status messages over the free part of the screen - though I can't imagine anyone who would play in this mode.

The game it plays is fairly strong, though I don't think it is as strong as the Psion program it imitates.

The longer levels provide a very strong game, and the three special modes should give even the best player some practice.

The longer levels provide a very strong game, and the three special modes should give even the best player some practice.