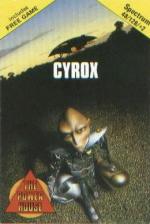 Yep, it's another multi-screened, get-the-bits-you-need-and-get-out-alive-game. You are Luther Irontooth (!), droid bounty hunter, and you're after the Cybor crystals, stored under heavy security on the planet Cyrox. It's fast, and at first, it's confusing. I tried all sorts of intricate manoeuvres to try and escape from the first screen without being zapped by the marauding meanie. Then I found that if I pressed fire the screen froze and escape was suddenly a cinch! I'd discovered the infamous freeze bombs, your only weapons in this bitter battle. However, with perseverance I finally got to explore the planet further (mind the feet!) There are components to collect as you whizz round that'll allow you to enter the vaults, collect the Cybor crystals and then teleport back to the beginning for another go.

The upper part of the display shows the status line. There's all the usual stuff, such as energy units, how many freeze bombs you have available, how many men are left and, of course, your score. The main part of the screen gives you a view of the vault you're in. You have left, right, up and down movements, but I couldn't help thinking, as I trundled round, that I'd been here before.

If you're into these types of game, you'll get some pleasure out of Cyrox and it's worth the two quid you'll pay. However, it is a leetle bit out of date, so if you've moved on to higher things, you'll probably not want to bother.

If you're into these types of game, you'll get some pleasure out of Cyrox and it's worth the two quid you'll pay.