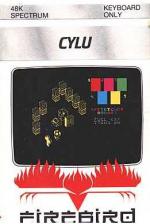 ACCEPT the challenge. Dive into the bowels of a Spectrum and enter a purple world strongly reminiscent of Ultimate's Alien 8. In fact, game play is just the same too.

The Ostans need a new leader and to show your cunning, wit and logic, you are dumped into a computer to prove yourself. Twenty-four objects, including books and microdrives, must be collected and deposited at the I/O unit - the starting point.

Many objects are hidden behind walls and approach from different angles is necessary to collect them. Only five objects can be carried at a time resulting in many trips back to the start.

A map is essential if you are to conserve fuel which quickly runs dry. Fuel containers are scattered in the early stages of the game - cunningly hidden amongst the debris. In later stages you will have to find the RFL - master refuel unit - which can be carried around and used when necessary.

Pick up all silicon chips. They neutralise the forcefields which block many paths through the maze. The fields are also numbered which helps with the map-making.

Further aid comes in the shape of a teleport network, which when accessed, will jump you to different sections. The only difficulty lies in finding the key to it. Return to base - RTB - takes you straight back to the I/O unit. However, if you carry the RTB and RFL, you will only be able to pick up three other objects.

The graphics, though well defined, are not as highly polished nor as detailed as those in Ultimate's master- piece. You control a walking turtle shell - a many faceted blob - which is difficult to recognise when first playing the game.

Firebird says Cylu was a borderline case for its Gold range and if the similarities to Alien 8 were not so apparent it would have made it.

However, it is an excellent copy, enjoyable and great value, and probably the best and most playable game in the Silver range.

Firebird says Cylu was a borderline case for its Gold range and if the similarities to Alien 8 were not so apparent it would have made it.