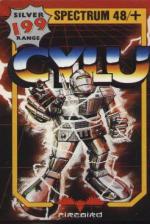 Cylu is a sort of budget version of Alien B, in which you have to manoeuvre a blob on legs around a maze, collecting various objects in order to prove your worth as Warlord of an extraterrestrial race, or something like that - the plot is more or less disposable anyway.

Also scattered along the way are a number of microsor chips which can be used to activate teleport beams, and to disable force fields, in order to allow you access to remote areas of the maze.

Like Alien 8, this game has three dimensional graphics, but these aren't clear or as varied as those in Ultimate's games. All the objects in Cylu seem to be boxes of one sort or another, are drawn with just straight lines and lillie use is made of shading, which would help to break up the monotony of the colours used.

There's no joystick control available, and I found the keyboard controls quite fiddly as there are quite a few options available to you when playing. You can "Examine" and "Use" objects, which is something that even Ultimate haven't included in their 3-D games.

It's difficult to judge this game actually. It can't compete with the likes of Alien 8, which is what it most resembles, but on the other hand it does only cost £2.50, and compared to other budget games you could do a lot worse.

It can't compete with the likes of Alien 8, but compared to other budget games you could do a lot worse.