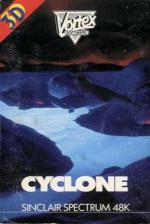 Stunning is the word to describe these graphics. The game is so absorbing that you lose track of time.

It's a 3D helicopter game, so the optional joystick is useful. Using shadow graphics, the ground is made to appear beneath you, and a complete set of instruments in the cockpit.

Houses, hills, fences and landing pads on which you refuel, are dispersed on islands, which can be shown on a map. You can even have an alternative view of the ground. Just to stop you getting bored between islands, there are low flying aircraft, and a cyclone which creates real flying hazards. Warnings are shown on the instrument panel. Even the sound is good.

Flying is tricky, but when you get the knack, it's great! It's so good, I nearly forgot to write about the plot! Collect medical supplies, rescue people standing beneath waving at you, then return to Base Island. Not easy, in the sense that there's something to learn, but there's lots of enjoyment to be had in the learning. It's good when you fail! The best game I've seen in months.