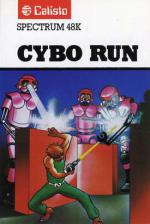 Cybo Run is yet another Robotron variant for the Spectrum. Your time is spent blasting robots with your laser before they either blast or bump into you. Their touch is as lethal as their lasers, and costs you one of your three lives.

You enter the game in a room with a few randomly placed walls. These can be used to shield you from your friendly Cybo-neighbours, but just happen to have a few thousand volts running through them. so don't touch them either.

Once you've succeeded in blasting everything in sight, it's on to the next room, and a nastier species of robot. You have to be quick, though, as there's a time limit on your stay in each room, and if you don't get a move-on an invincible someone appears out of nowhere and kills you.

This version is not as fast as some, and would score highly were it not for some very annoying features. First, it uses the cursor keys for movement, so you really need a joystick for satisfying control. Second, it doesn't tell you how much time you have left in each room. Third, and most annoying of all, the program occasionally starts the game by positioning you right next to a robot, costing you a life before you've even begun.

Cybo Run scores well on playability, but Spectrum owners are spoilt for choice when it comes to games like this. Probably better to give it a miss.

Cybo Run scores well on playability, but Spectrum owners are spoilt for choice when it comes to games like this. Probably better to give it a miss.