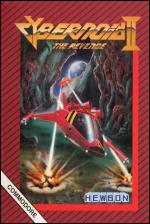 The brilliant, explosive and demanding sequel to Cybernoid hits the C64

Remember the good old days? Boy, were you hard! If there was a board to sleep on, you slept on the floor. If there was a glass to drink from you smashed it up and drank your beer neat, straight of the ground. If the Federation needed it, you swallowed a jar of tin tacks, tied a Rambo band around your head, leapt into the nearest Cybernoid and - no messing about, no questions asked - you were off.

Phwoar! Didn't you get rid of a whole fleet of pirates single-handedly? Yessir, Mr Incredibly Hard Man, you certainly did and now the Federation, under attack from vicious enemies, is asking you to do it again. Is it dangerous? Yup. Is it suicidal? Yessir. Can you refuse it? Nope, of course not.

While you've been taking a typical well-hard geezer's rest, your favourite fighting machine has had a bit of a facelift. In addition to the usual selection of bombs, bouncers, seekers, smart bombs and shields, it's got a couple of extra weapons up its sleeve. If you feel like leaving a trail of death and destruction in your wake, drop a few time bombs and wait. Stuck beneath an alien emplacement? Dead easy - just fire one of those ultra powerful, mega-violent tracking bombs. It'll move right round the screen blasting every little living thing in sight.

There's just one thing: while you've been away the enemy hasn't been exactly well, er, idle either. In fact, they've booby-trapped the flight paths with more bullet pods, weapon emplacements, caterpillar death squads and homing aliens than you could shake a stick at (if you had one, that is). Worse still, you've only got limited supplies of each weapon so if you use all your shields up too soon, you'll end up making a speedy trip to the great scrap-yard in the sky - and this time you won't come back.

You do get a few goodies for your trouble though. Every now and then you can pick up a mace or a bonus package left by some negligent alien ship. But that's about it - from now on, you're on your own.

Just when you thought it was safe to climb back in your lean, mean fighting machine, Cybernoid II appears! I didn't think it possible, but this is much better than the original. Not only is it tougher - one or two writers here (who shall remain nameless, Maff) used all their lives getting off the first two screens - it's also more varied.

You've got more weapons (seven in all) and there are harder aliens to face - all of them beautifully designed, coloured and animated. Each screen has its own method of tackling, but that's not to say you can't just sit there beating the crap out of any alien who comes within missile distance!

Every part of this game makes demands on some of your reactions - whether it's frantically dodging ground-crawlers, trying to sneak a gap between bullets or simply precise blasting. But, be warned - it's tough, and it's going to take a lot of patience to master. Try our cassette and see!

Yeah! Beat them aliens, blast them, maim them, beat them into the ground. Cor! Really gets rid of your excess aggression playing this game. All of a sudden I feel at peace with the world.

Not that I'd call Cybernoid II the easiest game in the world to play. In fact, under pressure, I'd probably admit to it being one of the hardest. For a start, there are loads more weapons, bombs, nasties and meanies then there were in Cybernoid. Some of them are really devious too. Just when you think it's OK to draw a sigh of relief, you realise that the emplacement you've just blasted to smithereens had an even more dangerous weapon lurking inside it and by the time you've thought about dealing with that, you're dead.

And whatever you do, don't relax when you're about to enter a new screen. More often than not there's some even more horrific monster waiting to melt you the minute you get to the other side. If you like your cookies really tough, you'll love Cybernoid II 'cos you'd be hard pressed to find a tougher cookie than this.

I thought Cybernoid was a hard act to follow, but boy have Hewson followed it! For a start, the graphics - talk about impressive animation and brilliant explosive effects! As my dad always says, it's enough to take your breath away. Phew!

The in-game music isn't quite as haunting as the original Cybernoid soundtrack but once you've heard it once or twice it really starts to grow on you. Oh yeah, I haven't said anything about the gameplay yet. It's not easy (I lost three lives trying to get out of screen one!) but it certainly is addictive. You always seem to be on the point of death just as you're discovering something new and after that... well, you've just got to go back to the beginning again. In fact, that's exactly what I think I'll do...

Graphics 94%
Brilliantly animated and packed with incredible detail - even more than in the original Cybernoid!

Sound 88%
A brilliant soundtrack (though not as punchy as the first one, we thought) and some pretty neat spot effects - just the right atmosphere.

Hookability 80%
It's a tad tough to get into because you've got everything thrown at you from the beginning.

Overall 91%
If the original hadn't already been released, this would be well on its way to a higher accolade.

Plenty of blast and bomb action for shoot-'em-up fans.