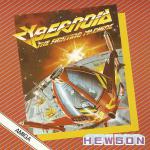 Even more playable than the C64 version! Waaah! 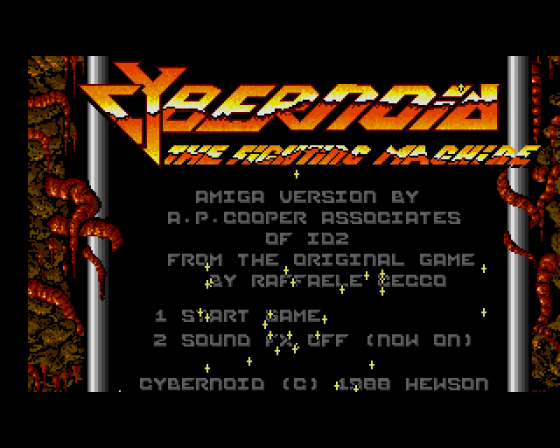 You are the kind of person that lives on the edge, living for danger, excitement and money. In fact, as much money as possible. In other words, you're a mercenary, OK?

All is not well within the Federation at the current time. Now under normal circumstances this would not bother you in the slightest, but when you discover that the Federation are offering a great sum of money for a pilot to fly a special mission, how can you refuse?

Only after agreeing to the mission do you discover the nature of the troubles and your involvement in the affair. Pirates have invaded several Federation depots stealing precious jewels and supplies, setting off all the automatic defence systems in the process. You must jet off to the depots and shut down the defence systems, destroying pirates and collecting treasure as you go. 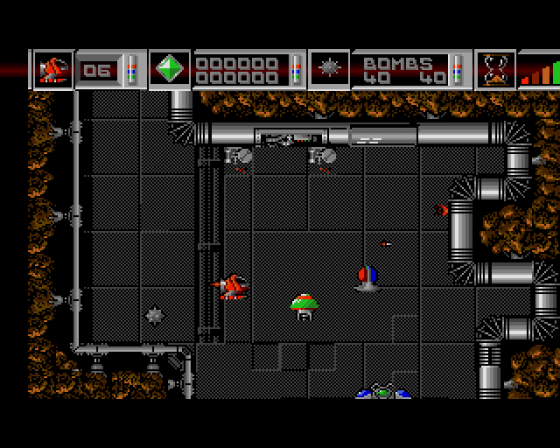 The depots' defences are extremely efficient and could knock the nuts off a fly at ten yards away. Also, they're not averse to removing parts of mercenary pilots and will hurl all sorts of death at you. Luckily, you have the power to fight back. You are flying Cybernoid - the ultimate fighting machine!

Readily at your disposal you have lasers (standard guns), bombs (single-shot, can be launched upwards or downwards), mines (hang in the air and destroy pirates that touch them), bouncing bombs (a set of four bombs that bounce off walls blasting everything they touch), seeker missiles (home-in on the nearest target) and a shield (for getting out of tricky situations).

All these (with the exception of lasers) are limited, but can be replenished by picking up pods on the way. Watch out too for the extra weapons such as circling drones and tailguns, which can be automatically retro-fitted to your ship by way of the everything-compatible FWF (Federation Weapon Frame). 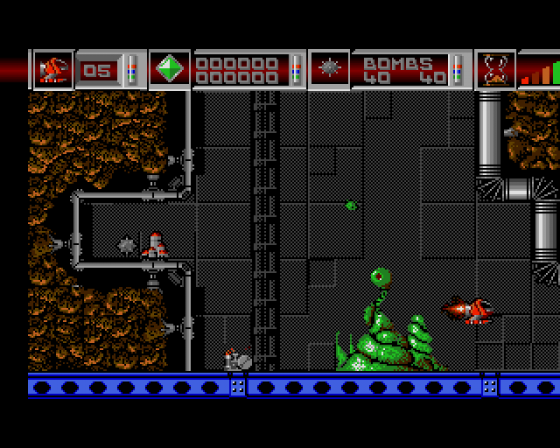 On reaching the first depot, you realise that the pirates have developed a 'shield and cloak' device to protect them from the Federation Defence Systems, so it's completely up to you to blast them away. Another effect of these devices is to cause the defence drones to attack you, since you are the only possible target they can locate. You've got to destroy them before they destroy you.

Shooting pirate ships causes them to drop their cargo of jewels and precious items, ready for you to pick up. If you manage to pick up enough treasure and shut down the systems, you can teleport the treasure to Federation headquarters. The Federation chiefs will consider that they have regained enough to cut their losses and run, so you are given a credit bonus and a new ship to spare, ready to jet off to the next depot.

But be warned, this time the pirates will have alerted their allies, and they're ready for just about anything - even a rough, tough macho kinda guy like you... 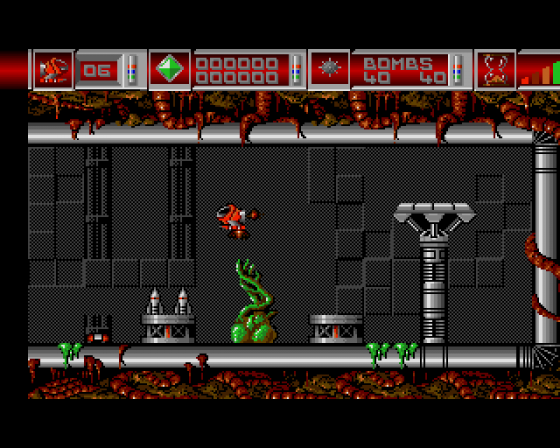 I'm afraid to say that I didn't agree with the original review of the C64 Cybernoid, because it was just too difficult to be playable. Now Hewson have released the Amiga version and not only are the sound and graphics better, the gameplay has been much improved. It's actually possible to complete!

The sprites and background are very colourful, with some marvellous use of shading, and the amount of sprites on-screen gives a frenetic feel. The sound is really good too, but it's a little on the sparse side - the odd tune or wouldn't go amiss.

Grumbling aside, Cybernoid is an excellent 16-bit conversion, greatly improving on the C64 incarnation. Buy it today! 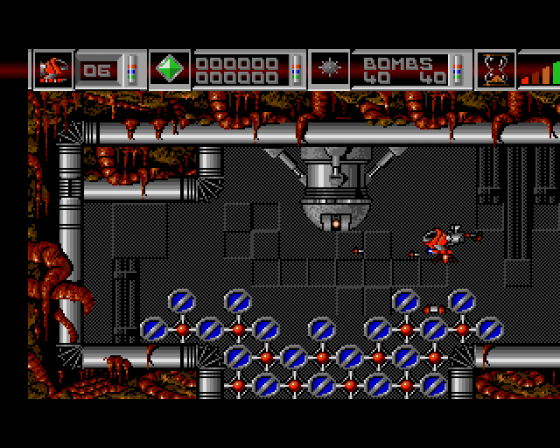 Unless, of course you haven't got any money or the shops are shut or they haven't got it in or... [Give over! - Ed]

I didn't think it possible, but Hewson's Amiga conversion of Cybernoid is even better than the C64 original! If there was anything wrong with the 8-bit version, it was the difficulty level, which led to many hours of hair-tearing frustration and monitors almost being kicked in.

This, however, is just right - the tight spaces aren't quite as tight and the alien bullets are more easily avoided. That's not to say it's not tough - apart from the fact that there are almost twice as many screens, the aliens swarm onto the screen trying to kick seven shades of sunshine out of you, right from the start.

Hewson are keeping up their record of quality games with a couple of superb conversions this month - if you can stump up the cash, buy both.

I really liked the C64 version of Cybernoid, as you may have seen in the review, but I have to say that the Amiga version is better.

The graphics are better, being more of a representation of the ships on the original packaging. The sprites are also smaller, giving you a much less claustrophobic feeling.

The sound is well implemented, but I would have liked to have heard more effects implemented or failing that some music. The playability has been enhanced, due to the increased playing area and easier to pass aliens, meaning that you'll come back to the game more often.

Plus there are more levels on the Amiga version! How's that for value for money! No? Oh, suit yourself then...

Presentation 68%
There's quite a nice high score table, but not enough options.

Graphics 94%
Wonderful use of colour and shading on sprites and backgrounds alike.

Sound 71%
Really good spot effects, but no music in the game itself.

Hookability 92%
It's tough... but not that tough! Instantly playable.

Lastability 95%
Lots of screens and enough playability to keep you hooked for a long time (and that's saying something!)

Overall 93%
A very high quality shoot-'em-up which is a great improvement over the C64 version.

A very high quality shoot-'em-up which is a great improvement over the C64 version. 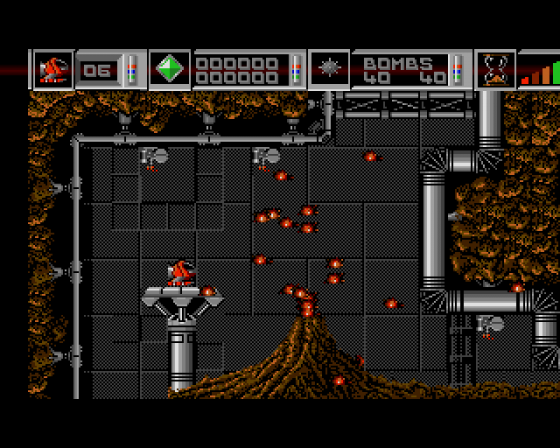