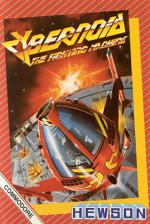 Evil pirates have ransacked the Federation's storage depots, stealing valuable minerals, jewels, ammunition and the latest in battle weaponry. The player takes control of the Cybernoid, chosen to retrieve the valuable cargo and annihilate the pirate hordes.

On the title screen, joystick or definable keyboard control is selected, and a choice between music or sound effects is offered. The game proper is displayed as flick-screen terrain bordered by metallic and organic structures and populated by alien pirates and their defences. Above this is an information panel, revealing the number of ships remaining, the score and cargo value, the current weapon mode and number of projectiles remaining, plus the amount of time left to reach the end of the depot.

Defences take the shape of gun emplacements and large pieces of vegetation which fire repeated and fatal plasma pulsers, plus missile launchers activated by passing directly over them. These are eliminated by launching the appropriate weapon(s). Occasionally it's necessary to destroy items of alien hardware in order to access the exit to the next screen.

Pirate formations also launch plasma and contact with this or one of their ships destroys one of the Cybernoid's four lives. When an enemy craft has been destroyed it drops its cargo of stolen objects which are picked up on contact. These objects alter the ship's appearance and offer external weaponry which is utilised on the more difficult screens. However, should a life be forfeited, all additional weaponry is lost with it.

The Cybernoid is capable of carrying multiple weapons, and apart from standard lasers, the arsenal comprises five powerful systems, selected individually from the keyboard and fired by a long press of the fire button. Bombs destroy large defence emplacements, impact mines halt pirate craft when placed at strategic points, a temporary defence shield renders the ship momentarily invincible, bounce bombs hurl around the screen destroying anything they touch and seekers track down their query. Stocks of these items are limited, but pirate ships occasionally drop cannisters which increase the currently selected weapons stock by one.

To aggravate the difficulty of the situation, a time limit is imposed on each level. Similarly, if the value of the retrieved cargo is insufficient when the end-of-level depot is reached, a Cybernoid craft is forfeited; if successful, however, bonus points and an extra life are awarded.

Hewson are now releasing software of a monotonously high standard, and this tradition is upheld with Cybernoid, a sparkling shoot 'em up very much in the same mould as Exolon and Zynaps. It's fast, appealing and very, very addictive! The subtle blend of frenetic blasting action and devious platform precision provides a tremendous strain on the concentration and patience; only a cool head actually stands a chance of finishing it.

I was particularly impressed by the graphics which are extremely smart, stylish and colourful without being gaudy or garish. There are plenty of ships, bullets and bombs whizzing about the screen, and it's often difficult to see what's going on as your ship is enveloped in a shower of debris and enemy fire!

The destructive action on offer is so entertaining that replaying the earlier screens doesn't prove in any way tiresome; its challenge is extremely potent and should keep you coming back time and time again (it did me!). My Only niggle is having to blindly grope along the keyboard to select extra weaponry - you daren't take your eyes from the screen and it necessitates having the computer nearby. The final touch of polish to an already gleaming product is the soundtrack which is great.

Suffice to say that if you only buy one game this month, Cybernoid is the one to go for.

The visual impression is superb: colourful backdrops, comprise a combination of slimy vegetation and metallic structures to give a completely otherworldly feel.

What's really impressive is the amount of movement on-screen, particularly when you've just destroyed a huge green plant that's been spitting plasma bolts at you; even though the action slows down, it doesn't interfere with the frenetic effect. Sonically it's way above average, with a great soundtrack complementing the explosive spot effects.

However, there's only one word for the gameplay - brilliant! A multitude of weapons are at your disposal, unobtrusively accessed from the keyboard, with the ability to blast just about everything in sight. The time limitation and cargo requirement features only add spice to the incredibly fast and addictive action. Each level combines quick reactions with occasional pixel-perfect positioning to create a polished, professional and compelling game.

Miss it and you're missing the best shoot-'em-up so far this year.

Here's another winner from Hewson! Combining violent and colourful blasting with a series of fiendishly tricky screens, Cybernoid instantly grabs your attention and keeps you riveted to the computer.

The action is fast and furious, with hordes of pirate craft to blast, plenty of horrid alien vegetation to clear and some very claustrophobic defensive networks to negotiate. Add this to a tight time limit and the fact that you have to pick up sufficient cargo to progress, and you have a very tense and frenetic game.

The extra weapons enhance the action even more, and since supplies are limited you're forced to think where and when you should use them. All this is complemented by a some superbly drawn sprites, gorgeous backdrops and a great soundtrack. If you're after a slice of pure arcade action, you can't do much better than Cybernoid.

Graphics 93%
Beautiful shading complements the gorgeous use of colour in the backdrops and sprites, creating a convincing alien feel. The animation is of a similarly high standard.

Sound 83%
The lengthy, aggressive and suitably stem title music is echoed by the raucous sound effects.

Overall 93%
An admirably polished and challenging shoot-'em-up which maintains the high Hewson standards.

An admirably polished and challenging shoot-'em-up which maintains the high Hewson standards.