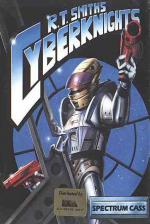 So who is this bodger R.T. Smith, that he gets his name emblazoned on the package of his new game Cyberknights? I'll tell you - he's the author of lots of strategy games, and if you ask me he should have stuck with what he's good at. The trouble is that Cyberknights ia a very, very, very, very, very good idea, but the programming just isn't that hot. The graphics are dire and the fancy icon controls don't do much to conceal the fact that all you really have to do is move around a maze zapping robots. Boresville Wyoming, you may well say.

You can play in two-player mode, in which case the aim is to eliminate your opponent, or in one-player mode, where you have ten enemy robots to destroy.

The scenario is the 22nd century, where robot knights battle in vast underground arenas to entertain the upper classes. You move left and right through the tunnels and up and down through lift shafts. If you're equipped with a jet pack, you can fly within the limits of your fuel. Your success in fighting other robots will depend on their specification and armaments. For instance, you can shoot their heads off, but they won't die until you destroy the body. An icon display allows you to select weapons including lasers, mines and radiation grenades.

Prize money is earned by destroying enemies, and can also be found scattered around the arena. There are plenty of helpful tactics to learn, like placing mines where your enemy will become trapped, or taking cover in liftshafts and emerging to fire. The clever part, though, is that although you can fight with default designs of Cyberknights, you can lash together your own using the character designer on the B side of the tape.

Cost, strength, weight, size and power consumption all have to be taken into account as you use the pointer and icon system to cobble together a knight. Completed designs can be named, saved on tape and re-edited for future games. Why do you go funny stripey colours in the lift? Why are there such atrocious colour clashes when two robots collide? Cyberknights is best avoided unless you have an aversion to slick programming and well-designed graphics.