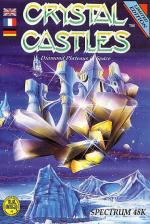 Welcome to the 93rd version of Pac-man. Yep, Crystal Castles is a very minor variation of that 'classic' game of the Seventies.

Let me describe it. Each level is a maze where you have to collect up all the crystals before moving on to the next level. Bentley Bear (for you are he!) should also avoid the meanies, and collect up honey pots for bonuses. Does all this sound familiar?

The only two variations that I can see is that this game is simpler (i.e. you can't go after the meanies, the meanies are extremely stupid and can be led almost anywhere, the mazes are less complex), and that there is a 3D element to the game, in that the maze is tilted slightly and there are raised portions in isometric 3D. These bits you can hide behind or lead the nasties around in order to block them off, there are also lifts and things to take you around if there is a vertical level change in that particular screen.

The world will never be free of overpriced, dreadfully boring and hyped games, but whoever it was that is quoted in the Crystal Castles advertising must have been blind drunk when he came out with all that waffle, as it's totally meaningless.

An average variation on Pac-man, if Mastertronic came out with this, it would be an average game for them and you could either take it or leave it. But a full-priced game from a company as highly regarded as US Gold, with a reputation for bringing over the best of American and sourcing some of the best of British (I'm still drooling over Gauntlet!).

Come off it, perhaps on the budget Americana label (perhaps!), or as an extra on a compilation. But full price?! Never!

The world will never be free of overpriced, dreadfully boring and hyped games, but whoever wrote those quotes on the advertising have been blind drunk!