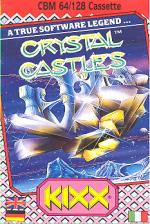 Bentley may well be a bear, but in this coin-op conversion his first love is gems, not honey. Eighteen Crystal Castles have floors covered with gems, but Bentley's not the only one eager to fill his pockets. Mad Marbles like collecting them, and will try and catch you if you move in on their patch. Tree Spirits are no less hostile, but if you jump over them they're temporarily frozen. Skeletons move at random, while Gem Eaters actually eat the diamonds - run over them as they swallow and they're destroyed. But Berthilda the witch can only be killed if you wear a magic hat. Don't take too long though or a swarm of bees appear to chase you around.

Bonus points can be won by collecting the honey pot, the hat and the last gem on any screen - rather than letting the baddies gobble it. The Castles are divided in three loads, six per load. Once you complete the game it goes back to the start, only faster. If you want to start off fast, you can select one of four speed levels, as well as a 'take it in turns' two-player mode.

Basically this is a 3D Pac-Man game complete with lifts, ramps, tunnels and hidden passages. The C64 version replicates the coin-op's shimmering castles with great graphic flair. The small screenshots on the back of the inlay look like coin-op pictures, and close up the game is still quite impressive. Sound is equally good, with the blips of picking up gems being very musical.

While this is an ancient coin-op, the Pac-man concept still have a lot of strength in it (look at Pac-mania on the Amiga) and this is one of the best versions around. Although repetitive and initially difficult to control, using diagonals, this is simple, uncomplicated fun which is well worth buying on budget.