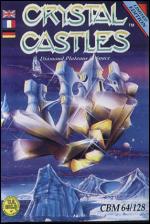 Poor old Bentley Bear. There he was, wandering about the wood in a complete daydream, when he inadvertently stumbled into the domain of the evil witch Berthilda. The hag cackled with glee at this cuddly bear's misfortune and thought of a horrible plan to mentally torture and confuse the fellow.

When he was brought before her she told him that she'd decided to give him the chance to earn his freedom. He could go free, simply by collecting all of the crystals from each of the rooms in her castle. Bentley thanked the witch and agreed to undertake the task, thinking that it would be a simple spring cleaning job. But little did the naive creature know what horrors lay in store for him...

You play poor old Bentley on his castle cleaning quest. Each room is laid out in forced perspective fashion and fills a screen. Bentley can run anywhere he likes, as long as a floor is present and walls or empty space aren't. He can also run behind objects in a room. Sometimes a room consists of several levels, each interconnected by lifts and ramps which the bear can use if he so desires.

Our hero is an athletic chap and has the ability to jump, springing across the screen in a truly olympic fashion over whatever lays below.

The floors in each of the rooms are jam-packed with crystals all of which have to be collected before Bentley is allowed to leave. To make matters worse, Berthilda's minions guard each screen, and she's deliberately forgotten to tell them not to harm Bentley - she thought it would be great sport to watch him desperately trying to collect the jewels and avoid the marauding horrors.

There are six types of horror - jewel gobblers, tree-spirits, ghosts, skeletons, mad marbles and bees - and in some of the rooms even Berthilda can't resist dropping in to pour a little more misery into Bentley's troubled life.

Jewel gobblers trundle about the place in a random manner, eating the jewels as they go. If one of them is mid-way between eating and digesting a jewel (you'll see it stuck in its neck), then Bentley can run through it, killing it and earning himself a points bonus into the bargain. Tree spirits and mad marbles pursue the bemused bear relentlessly and cause him real trouble, especially since they can't be destroyed. Bees appear if Bentley takes too long over a screen, and they give furious chase to the hapless fellow. On most of the screens there's a honey pot which, if collected, delay the bee's appearance for a while. The rest of the meanies slowly trudge about, generally being a nuisance and blocking the way - if Bentley comes into contact with any breed of horror he loses one of his lives.

There's one reprieve - if Bentley grabs the magic hat which sits on a screen (on later levels it tends to bounce around), he becomes invincible and can travel through the minions unharmed. Another nice bonus gained by wearing the hat is that if Berthilda appears on a screen, she can be made to go away if touched by the hat wearer. The bad news is that the hat's magic powers only last for a limited period of time, after that Bentley becomes a vulnerable bear again.

When a screen is cleared of all its jewels, Bentley moves on to the next one. A bonus is given if Bentley touches the last jewel, but if a jewel gobbler eats it then the bonus is lost. There are ten levels to the game, and as in the arcade version there are four different skill settings. There are also three secret 'warps' which can be used to skip certain screens.

Oh dear. This really isn't very good despite the relative neatness of the arcade game. Somehow this conversion has been terribly messed up. None of the magic that blessed the original has been brought across at all.

Unfavourable comparisons with the arcade version aside, Crystal Castles isn't really up to budget standard, visually or audibly. The gameplay is awful as well, it bored me to tears. At £9.99, Crystal Castles is something to be avoided.

I love the arcade game, it requires a brilliant combination of technique and reflexes if you are to complete it. This conversion isn't lacking in any of those departments and plays identically to its arcade parent - you even have to use arcade tactics to complete the screens. I do think that the graphics and sound could have been a lot better though, and it's a bit of a shame that the cassette is a multi-load job. Nevertheless, every feature of the arcade original has been included in this version, and if you like the arcade game you ought to give it a go.

Crystal Castles is little more than a glorified Pac Man, only with trees that run around trying to kill you instead of ghosts. Ridiculous. Whether intentional or not, there is a very nasty glitch-type thing when you bear travels around the back of the building.

Okay, so it might be there so you know where you are but it is unpleasant, even unprofessional.

I wasn't enthralled by this for very long. It's far too repetitive.

Value For Money 40%
Ten quid is a high price to pay for a glorified Pac Man.

Overall 45%
May appeal to fans of the arcade game, but it's doubtful that it will appeal to anyone else.