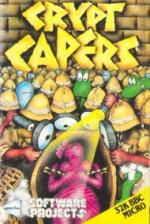 Somewhere deep beneath the shifting sands of the Sahara lurks the tomb of Pharoah Willy, and wealth beyond measure. Only you - and umpteen other Beeb owners - know of its location. A perilous expedition is inevitable. As you might suspect though, the tomb is far from hospitable.

Indeed, it makes the Well of Souls look not unlike Maplins. Dusty corridors rustle to the sound of weaving snakes and ancient fireballs, while huge unstoppable boulders careen through the lower levels. Who would have thought that archaeology could be so 'azardous?

The quest culminates with the wholesale ransacking of the Pharoah's chamber on the twelfth level, attained only after collecting all the Egyptian keys from the preceding levels. These are cleared only after beating a bonus counter that decreases when you waste a snake.

Visually the game is superb, with enormous attention paid to detail. Tut's mask (one of the many treasures) is just glorious. Author Mike Jakobsen has obviously done his research well. Playwise it recalls Mr. Do although owes little to it in execution.

The difficulty levels are well judged and key response is excellent. The result is arcadia of the highest quality. After several hours' play I was hauled from the BBC sandy, dishevelled and totally addicted. Something of a treasure, I'd say.

Left me sandy, dishevelled and totally addicted. Something of a treasure, I'd say!