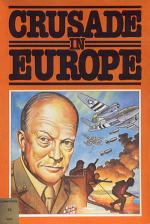 Normandy, The Rhine and the Bulge - the Crusade For Europe is on. And it contains a good mix of action and excitement for the new wargamer and a lot for the more experienced player.

This game follows the same pattern as a number of other simulation-type games currently available which - I am pleased to see - are becoming more and more popular.

The first point which is worth making is that, although at an initial glance, many of these simulations seem quite foreboding, this is often not the case when it comes to the actual play of the game.

This is true with Crusade In Europe. The game mechanics are, in fact, amazingly simple although there is still plenty to think about for the most experienced wargamer.

The booklet, which is included in the pack, is extremely well presented and easy to follow. If you just want to get straight into the play, you do not really need to read very much at all for a game of this potential complexity.

There is, however, a wealth of additional information in the booklet for the real buff - historical and military background, hints on play, maps, details of units, etc. All of this, helps to create atmosphere and, I found, a quite surprising sense of excitement and addictiveness.

The player has an immense number of options open to him on loading up the program. He first of all chooses which major scenario he wishes to play: Battle of Normandy; Race for the Rhine; Operation Market Garden; Battle Of The Bulge; The Battle For France.

There are then a number of different variations available for each scenario. In addition to this, the player has complete choice of one or two player game. Who controls which side; Handicapping system for the different sides; Choice of icon or token graphics; Style of movement; Joystick or keyboard control.

The facilities within the game - viewing terrain, checking overall situation, checking units and generals are also quite useful.

I must say, however, that I personally found the overall level of graphics disappointing and although similar to the other games in this series, not really quite up to the current standard of graphics in some of the other current wargames. I put this mainly down to their size.

One of the options available in this game, is to view the overall disposition of the troops. To be frank, the drawing of this map is very slow although it does not really detract too much from the game.

Sound effects are rudimentary but not all that important.

In general, I feel that this game is a good buy, well presented, thoroughly researched and enjoyable to play. The levels of computer tactics built into the one player game make it perfectly possible for either the novice or the veteran to have a good battle, although I cannot help feeling that the game will be better value for money to the experienced wargamer than the novice or the arcade freak.