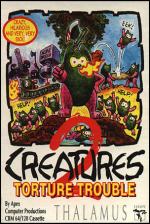 The wacky Rowlands brothers return with the sequel to arguably the biggest C64 hit of last year. It's fast, frantic, hilariously funny and very, very sick. Yep, Clyde Radcliffe is back and even more Fuzzy Wuzzies are being fried, chainsawed, machine-gunned and dropped into vats of acid than before. Mark "Fuzzy Friend" Caswell is always one to help in a tight spot. So with Acme survival kit in hand, he sets out to help Clyde save his pals.

Good lord, it hasn't taken Steve and John long to program the second Creatures game, has it? Just over a year has passed since Phil, Stu and the Welshman (How's it going, Rob?) awarded this non-heinous game 96% and a Gold Medal. For those of you with a short memory, our beloved new Ed has asked me to start this review with a recap of the original game...

Once upon a time, in a galaxy far, far away was a planet called Blot. But the cute and fuzzy little inhabitants were forced to flee from a terrible fate - being called such an unhip name as Blotians.

And these little fellas were very hip indeed. So once on their spaceship they decided to change their names; they became the Fuzzy Wuzzies. They ended up on Earth, but found that their neighbours were a band of grumpy (and very unfriendly) Demons. One night, these nasty creatures invited the Fuzzies to a party and kidnapped them all, except Clyde Radcliffe (our hero) of course. After many adventures he bravely managed to save his friends from very gruesome deaths, and all ended happily.

But the Demons are back for a rematch, and they're very, very annoyed. They've Fuzzy-napped Clyde's nine children (he's been busy since the last game!) and hidden them on three islands (so that's... erm, three kids per island).

Again, the fiendish torture machines have been dusted off and are even now being put to very nasty use. The game starts on the first island with Clyde racing around saving his little ones. Each island contains three torture screens, and three playable interludes.

As with Creatures, Clyde is initially armed with Droopy bullets and a Fiery Throat Flamer. The torture screens are all as devious as ever, the puzzles are very challenging but with a bit of thought, the solution is clear.

Clyde shouldn't take too long deciding his course of action, though, 'coz there's a timer ticking steadily down. The torture screens take many guises, but at the end of the day one of Clyde's children dies if he's too slow.

And believe me, the torture devices are fiendishly sadistic (i.e. loadsa guts 'n gore). Included are vats of acid, a Fuzzy being roasted over an open fire, and my personal fave, a chainsaw-wieldng Demon slicing up a poor helpless Fuzzy. Once a baby Fuzzy has been rescued, it's onto an interlude screen.

Far from being a rest, here you control two Fuzzies carrying a trampoline. Their job is to catch a set amount of Fuzzies flung off a cliff by a nasty Demon. The catching bit is easy, the bouncing Fuzzies then have to be guided across the screen to a safe platform (and within a strict time limit).

Once all three Fuzzies on an island have been saved, they must be carried, one at a time, across to the next. Clyde puts on his scuba gear and swims through the horizontally scrolling sea, avoiding obstacles and returning to the surface for air!

The best part of the original game was the interlevel torture screens, and stone me if the Rowlands bros haven't based a whole game on this very sick theme (but I love it). From the second the game finishes loading, the slick programming shines through, from the hysterical title screen to the bright and beautifully animated sprites.

Apart from the original Creatures, I don't think I've seen a game that's so instantly playable. I had to almost literally tear myself away to write this review [Ah, that's why it took five days to write - Ed].

If anything, the death sequences are bloodier than ever, but they're all very tastefully done (no buckets full of guts here matey - well, not too many anyway!). The sound is as impressive as the graphics, a selection of ditties soon have you whistling along as you attempt to save the poor little fuzzballs.

Steve and John have come up with another winner, and in my books it's better than the original. Excuse me while I go off and attempt to prise the joystick away from Claire for another go.

Being rather fond of the cute little Fuzzy Wuzzies from the first episode, I was thrilled to hear that those fabulous Rowlands brothers had brought out the sequel. The presentation is excellent, with the frolicsome Fuzzies dancing around in a colourful parade.

However, their little party is short-lived and the dastardly Demons soon begin inflicting their horrible tortures! The humour element is strictly for the macabre among us, with loads of Fuzzies meeting remarkably grisly deaths, my personal favourite (despite vegetarian tendencies) is the roast Fuzzy [Yum, yum - Ed].

Other torture screens involve vats of acid, Fuzzy-mashing devices and chainsaw-wielding Demons. Each of Clyde's nail-biting rescues is more gruesome than the last. The victims cry out pathetically, making their plight even more pitiful. The interlude screens are tricky, the Demons hurl Fuzzies towards the ground with delight, one dropped fuzzy will make a real mess!

It's colourful, fast and gruesome. But what a laugh! This is highly recommended for real blood-thirsty, evil individuals like me.

Presentation 93%
Hysterical title and presentation screens, multi-load isn't too bad with each torture screen and interlude in one load.

Graphics 96%
A bucket full of colours (and several buckets full of fake blood) make this one of the most visually stunning games around.

Sound 95%
With so many bop-along tunes to get you grooving to and wicked FX, you'd think you were playing a Dannii Minogue record complete with screams of pain!

Hookability 97%
From the moment the title tune blasts forth, the joystick is welded to your hand.

Lastability 96%
I guarantee you'll be playing Creatures II until all of Clyde's kids have been rescued.

Overall 97%
Creatures II is even better than the original. If this isn't the best game of 1992, I'll eat the Scorelord's mask.

Best game ever... I guarantee you'll be playing Creatures II until all of Clyde's kids have been rescued.