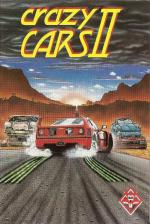 This is the stuff of which the great American road movies are made! Driving coast to coast across the good of US of A, pedal to the metal, you hurtle down that two lane black top! But this ain't no pleasure ride! You're out to break a stolen car racket run by none other than some corrupt coppers!

To aid you in this task, you get to drive a nifty Ferrari F-40. equipped with the latest fuzz-bustin' radar! The only trouble is that you won't just encounter the bent bears (That's 'rotten rozzers' to you Limeys!) but also the honest injun' straight smokies too! Blimey O'Limey!

The game comes with an actual map of the real life relevant interstate Freeways and from this you can plan your own route! But remember, the quickest highways will probably have county-mounties thicker than bugs on a wind shield! Your task then is to cross four states, avoiding the pilfering plods who are intent on running you off the road, as well as steering clear of the bona fide bill and their road blocks who are all out to arrest you!

"Alright, alright, already!" I hear you cry. "The scenario sounds great but when you reviewed the first Crazy Cars game, you lot said it was a duffer!" Well, yes, Sean did give it five out of ten and said that the game offered nothing new to the genre! Did French publishers, Titus, take any notice of le Spoon King?

Mais oui! 'Cos it's kept the gameplay features that Sean praised, but at the same time made the game much more interesting by the addition of more roadside detail. You can even leave the road on a time limit, and drive across the fields! Handy for avoiding road blocks! You can also actually plan your route - even making last minute detours on minor roads to avoid the 'heat'!

One gripe is that it does seem very easy to get killed in this game, but I suppose when you're traveling at 327 mph this is an occupational hazard! Fortunately, the game is limited by time and being arrested (!) rather than a number of lives, so you can still complete the course even having blown up about ten Ferraris en route!

The graphics are good, and though the car and road are monochrome, the sprites and roadside detail are nice and big. The game scrolls really smoothly, there're curves and up/down slopes and the overall action is fast and furious. The sound too, especially in 128K, is great - with the waiting American police sirens rising and falling in volume as you pass them, the car noise, and (... Lookout for that lampost!!...) the inevitable explosion sound! All in all a great arcade-type rolling road romp which reproduces well the excitement of road movies in which one looney in a car takes on a zillion cops in a mad cap chase! I thought it was great!

This is one great rip-roaring cops and robbers type outrageously fast driving game, with scrummy sound on the 128k version.