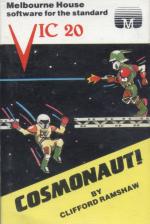 This is known in the trade as a platform game. Nothing to do with British Rail; you simply control a little man who goes running and leaping over a series of platforms avoiding nasties.

In this case, the man is a cosmonaut and the nasties are a shuttling spaceship and stormtroopers armed with laser guns. You have to use lifts to descend from platform 4 to platform 1, trigger a mechanism which releases your spacecraft and then complete the return journey.

Trouble is, that's it. This is the unexpanded Vic, so no more screens to go on to when this one is mastered. Other drawbacks include jerky movement and the fact that if the shuttling spaceship is in a certain position when the game starts you can't avoid immediately losing one of your five lives.

On the other hand, it does feature some of the usual platform game appeal. With just three keys - left, right and jump - you can roam all over the screen.

And it's great fun dodging into lifts and leaping successfully over stormtroopers - indeed if you time it right you land on top of them squelch.

Down at the bottom platform, excitement mounts briefly as you try to stand on an arrow which opens a trapdoor and allows you to free your trapped craft.

So Vic owners, you have a choice: either buy a memory expansion and get some really meaty games, or settle for a few hours of harmless entertainment on numbers such as this.

This is the unexpanded Vic, so no more screens to go on to when this one is mastered.