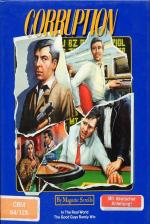 Is it a big bad world, or is it a big bad world? I thought Ludlow Bridge was something of a danger spot - you never know who's going to disappear round there next (hur, hur) but down in the smoke of London things really are getting bad. You've just become a new partner in the firm of Rodgers and Rodgers, got your new BMW and a nice (well, not very nice) new office, when things start looking a bit dodgy. That nice man, David, your friendly partner looks if he's out to get you. Everyone, including your wife, David's secretary and the staff of the local hospital are trying to make you look as if you're the guilty part in an insider dealing case.

Sound familiar? In that case, you probably read old Harley's review of the Amiga version back in the September issue. At the Personal Computer Awards, a couple of months ago, it was voted Game Of The Year. Anita Sinclair must be getting a bit bored with winning all these awards - she picked up Game Of The Year (for Guild Of Thieves) at the British MicroComputing Awards in 1987 as well.

In many ways, the structure of Corruption is a far more original game that Guild Of Thieves. There's the setting for a start, but even more unusual than that is the way the game is played. Time is all important. It's not so much a matter of making your way around a set of different locations as being in the right place at exactly the right time. You play against a 24hr clock which advances one minute for every turn. As time passes, David's plot thickens... unless you interfere, everything just goes on according to plan.

All this makes the adventure one hard nut to crack. As you make your way through the office building, visit the park (be careful crossing the road) or just take a walk to the chemist's you might come across nothing at all. Try at another time of day and you might find a mega-hint. For Chuck 'Sherlock' Vomit, fitting the pieces of a dead confusing puzzle together didn't pose much of a problem but for punier (and younger) adventurers the whole thing might prove a tiny bit too hard. It's certainly tough trying to make sense of anything at first. The main thing is to look out for yourself and trust no-one. Don't be fooled into thinking anyone is your friend. They're not.

Though the graphics aren't quite as nifty as those in The Pawn or The Guild Of Thieves, they aren't half bad and still amongst the most impressive you'll find on the C64. I reckon it's all to do with the subject matter. When you've only got so many pixels, it must be a lot easier to create fairy-tale fields and castles than detailed London streets - and I'll belt anyone who disagrees.

As you'd expect the parser is very comprehensive and there are plenty of extras too. You can do all sorts of things with the graphics (turn them off, switch them back on, shove them up the screen, view them only the first time you enter a location and so on) and mess about with the location texts to your heart's content. Interaction is limited to asking or telling other characters about something, and though you can ask most people about anything under the sun, you'll only get a useful reply if you pick the right topic.

Insider dealing is a bit of a specialised subject and isn't guaranteed to be everyone's cup of tea. It will probably interest a whole bunch of business people who don't normally play adventures and put off a lot of adventurers who like their games to follow a more traditional style. I reckon Harvey Harlequin was a bit harsh when he gave the Amiga version 81%.

Corruption may not have "mass" appeal but that doesn't prevent it from being a top quality, highly original adventure product. Don't buy it straight away - give it a try first. If you like what you see, you're in for a whale of a time...

Corruption may not have "mass" appeal but that doesn't prevent it from being a top quality, highly original adventure product.