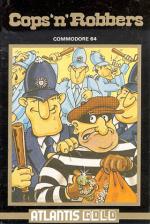 Cops 'N Robbers is what must be described as a very basic arcade adventure, a bit like a very basic Sabre Wulf in its layout. You take the role of Light Fingers Lonnegan with the task of robbing the Acme Diamond Company, allegedly the world's largest suppliers of uncut gems. Starting from his car he must make his way either to the Police Station, mine or the ADM building.

Watch out though, there's a policeman patrolling the streets and he's out to get you. If he gets near you can shoot him, but beware, more of his Policeman chums will come after you. Occasionally a dangerous helicopter flies overhead. It must be at a blooming low altitude though, because if it touches you then you'll lose one of your three lives.

If you go to the police station then you'll have to work your way round corridors to get to the key. Watch out for the marauding Policeman though - boy, he's really mean and pounces given the first opportunity to cart you off to jail, and that would be a real shame!

Once the station has been negotiated you can try elsewhere the really spooky mine, perhaps? This consists of a maze, complete with ghosts which have to be avoided. You can also shoot them which is odd - surely ghosts can go through things?

In the mine, there are diamonds and some sticks of TNT to pick up, these add points to your score. The final building you can visit is the ADC building itself, although in here you must beware - the police are hot on the trail and there are lots after you. If you manage to pick up all the diamonds and open the safe then you can return to your car and zoom to safety.

If you thought some of the old Mastertronic games were bad, you should take a look at this one - it's grottiness knows no bounds. The graphics are abysmal with only commodore graphics and a few unanimated sprites. I mean the policemen just slide about the place!

Sound is just as bad, the few sound FX are screechy and 'orrible and had me scrabbling for the volume knob within moments.

The game has all of eight locations and to make up for the lack of locations is the fact that when you die you have to start the game all over again.

This is a really poor quality piece of software in the strongest respect and I don't consider it to be worth anything like £2.99.

I must admit I was rather surprised to see this very poor attempt at an arcade adventure actually being released, even at the low price.

The graphics are extremely crude, with little or no animation to speak of and the sound is just as bad.

If the game itself had been at least half-decent then I would have some reason for recommending it, but no - the gameplay is on a par with the graphics and sound, making this one of the worst budget games currently available.

Graphics 9%
No animation to speak of and generally pretty pathetic character graphics/movement.

Lastability 8%
I doubt it very much.

Value For Money 15%
Not bad if you like colour ZX81 emulators.

Overall 9%
The worst program we've seen on the C64.

The worst program we've seen on the C64.