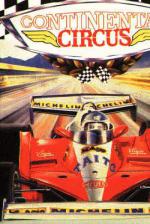 As you probably know, Taito's coin-op was originally meant to be called Continental Circuits, but wires got crosses and the translation came out as "Circus"...! Strange but true.

Anyway the "circuits" in question are a series of eight tracks set around the world: Brazil, America, France, Monaco, Germany, Spain, Mexico and Japan. Each has their own hazards, and some are more difficult than others; Monaco, for example, is almost entirely made up of bends and chicanes, whereas Japan is full of lovely long straights.

On every track, you've got to race your way through the field to achieve a qualifying position. At Brazil you start off in 100th place and have to make your way to 80th; by Japan you've got to finish in the top three. Each course also has a strict time limit; crash once and you'll be lucky to finish.

If you hit other cars or roadside obstacles, you set your vehicle alright, and it's time to enter the pits, where the clock is stopped until you're fully repaired. If you don't make a pit stop, you'll eventually blow up, spin off the track and lose valuable seconds.

Although the original coin-op is an enjoyable game, the 8-bit versions have failed to capitalise on the machine's fast action, and the end results are rather routine Pole Position clones which have been seen before in various guises over the last four years. The pit stop is a neat idea, but really there's little else that's new.

The 16-bit versions look and play similarly to the arcade machine, and are enjoyable and addictive. The only problem is that there isn't a lot of variety in the gameplay, so lasting appeal is questionable. Still, if you're a fan of the original coin-op you should love both versions. Those who are not so sure should check out other racing games on the market before making a purchasing decision.

There's very little sense of speed and not much room to overtake opponents, so it soon becomes more annoying than enjoyable.

A reasonable enough attempt at the coin-op, but more detailed 3D would have helped. Otherwise, it's a pretty nifty race game, as frustrating as it is addictive.

The graphics and sound do little to emulate the coin-op, and it's far too easy to complete.

The sound could have been better (the engine's effects are a bit whiny), but otherwise it's like the Atari ST. It's simple enough until you get to Monaco, then you start smashing up your joystick.

If you're a fan of the original coin-op you should love it.