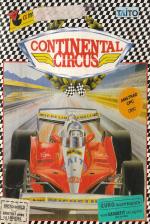 One hundred of the most sophisticated motor vehicles ever to grace the tarmac are lined up for the Brazilian Grand Prix. Their three-litre power units rattle and hum waiting for the off. Five seconds and a plume of tyre smoke later, the race is on. Millions watch as the drivers take corners at ridiculous speeds and pass within nanometers of each other while overtaking. This is the real Continental Circus, a troop of ultra-tech gladiators travelling the world in shining steel chariots.

Circus is viewed from above/behind and there are very few controls, accelerator, left, right and gear change to high or low - sensory overload is not actually a problem with car sims. It does break the rules in one vital area though, it's fast and playable! Only WEC Le Mans has achieved any level of graphic clarity at speed, and that's left streets behind by Circus.

Trackside, you wait for the nice lady to give you the five second flag - time to get those revs up. There's a technique for quick starting and it pays to practise, otherwise you'll find those hard won places slipping away on the first straight. The lights change fast, so rev up and stay sharp.

When you finally get to change into top gear and blast down the straight, get set to hold on right. This one's a humdinger (yup, your hums will be dinging like never before). Top speed is a fine balance of driveability and nerve-jangling pace. Exact and well timed movement is necessary to weave your through the field, and driving on the grass is even permitted during real on-the-edge dicing.

Each track has an intro tune and little jingles for section finishes and pit stops, and a resounding whoosh breaks up the engine noise when ou scuttle past somebody. The revs are more than a continuous monotone, actually changing as you accelerate, allowing you to experience the drive by feel, ignoring the delays.

Motor racing is tough of course - and so is Circus. The real danger lies in the other competitors, not the track. Drivers seem positively drawn to your machine, trying to T-bone you on sharp bends and breaking suddenly as you're climbing over their gearbox. A prang doesn't mean game over though. Finishing is still possible, but you'll have to push your luck and the remains of the car to the limits.

On every section of the track there are pit lanes where the sick cars of the world go to get medical help. Pulling over here causes two little mechanics to rush to your aid, and before you can say "very nice man" everything's fixed. Pit lanes re useful to those with healthy motors too! The extra wide road provides an ideal overtaking zone when you're in traffic: go wide, drop a cog and 'ring' four or five at once.

Good placing are the key to success at the Circus. To quality for the second race you've got to overtake twenty cars in the first - Brazil - and finish 80th or above. Each track is split into sub sections which you've got to complete in an allotted time, the margins for error and accident recovery getting slimmer with every stage. If you make it round but haven't taken enough people then you do the same circuit again, starting from a higher grid position. Success is greeted by a flag-waving marshal and a trip to the States.

Life in the fast lane isn't easy in Brazil; in America it gets difficult (the first US stage is a sprint trial with gentle corners, long straights and very little time) and in Japan downright dangerous. Then of course, there's the weather. Usually you're on the limit going into a corner when the rain splatters your visor. Traction? Forget it! When the rain starts, attempt any high-speed cornering shed in slicks and you'll redesign the body shell.

What can a driver do to improve wet weather handling? Simple - fit chunky rain tyres by screaming into the pits at the next opportunity. That is if you can make it to the pits while aquaplanning everywhere! The rain is random and doesn't feature in Brazil (the first race) but it adds excitement by removing the certainty that you can complete any lap if you practise enough. The rain cuts in after the first set of pits, so you're forced to complete at least one section with white knuckles (if not so white overalls).

The graphics don't break any new ground, but the cars' shapes are solid and easy to judge when overtaking. The track is easy to read and each circuit has a characteristic backdrop (Jesus can be clearly seen on that mountain in Brazil). There are no WEC-style crashes, but the eight different tracks more than make up for that. The essence of the original has been captured without resorting to crudely copying the arcades version's 3D effects. These peripheral details are ignored: the important stuff is the racing. And what racing it can be. If you've got a lead left foot then this one's for you.

Continental Circus - the game with no brakes!

The best driving yet for your CPC! If you liked WEC but got bored with driving round the same old circuit then Continental Circus is the one for you. Test drive it today!

The graphics don't break any new ground, but the cars' shapes are solid and easy to judge when overtaking.