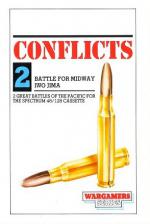 In Issue 42 I looked at the first three-game volume of this compilation series; Conflicts 2 has only two games, both set in the Pacific theatre during the Second World War.

Battle For Midway deals with a surprise attack by the Japanese fleet on the American Midway Island air base, and the ensuing battle. The Americans won an overwhelming victory, largely because they'd broken the radio codes of the Japanese and were aware of their plans.

The game's demanding victory conditions tailor it to this historical success; the player must take the American side, and to win he has to destroy more than two Japanese aircraft - earners for every one of his they take out.

It's neither sophisticated nor satisfying. The player has command of two task forces and two squadrons of aircraft. Attack aircraft can be launched from the Midway air base, and from the fleets as long as the aircraft carriers survive. These units are moved around the sea surrounding Midway Island in a fairly aimless way, waiting for one of the Japanese fighting units to come into sight.

When that happens, a task force or an air-attack squadron can move in to intercept the Japanese; this involves positioning the player's unit next to the Japanese one, and watching a short tacky animation of planes swooping over a panorama of ships. The player is provided with movable sights and the ability to fire, but this seems to have no effect on the outcome of the battle.

There are three levels of difficulty and six speeds to choose from (none breakneck), and occasional excitement is injected by surprise Japanese air attacks.

Battle For Midway is competently enough presented, complete with lists of the ships, but it lacks all atmosphere. I found it difficult to make sense of the gameplay, and there's no scope for interesting tactical play.

Sadly, the same has to be said for Iwo Jima. This game recreates the battle for that island south of Japan, which was of strategic importance for American air missions. It was the first time in the war the Americans had really come up against the fanaticism of the Japanese army. And though the American superiority in numbers guaranteed victory, the 22,000 Japanese soldiers defending the island held out to their last 216 men and the Americans losses were enormous.

The screen display is reminiscent of Falklands '82, as are the orders system and gameplay. A garish picture of Iwo Jima shows a few landscape features and five landing positions. The player, taking the American side, deploys his forces by landing units on the island and moving them inland. The orders are dealt with in a rotation sequence, and in each turn units have the choice of moving or attacking.

The Japanese forces don't come into view till the player's units are within five squares of them.

Iwo Jima has most of the features of a conventional wargame - hidden movement, terrain effects, and basic statistics for each unit which affect combat - but it's very poorly presented. Still, the gameplay is much more entertaining than Falklands '82; after I'd spent a frustrating morning trying to get something out of Battle For Midway, Iwo Jima had me absorbed, in a simplistic sort of way, for an afternoon.

But it looks like a budget game and should probably be one, let's hope Conflicts 3, which PSS says will be released in the late autumn, will be better than this compilation.

After I spent a frustrating morning trying to get something out of Battle For Midway, Iwo Jima had me absorbed, in a simplistic sort of way, for an afternoon.
Logout