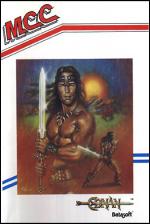 "Know, O prince, that between the years when the oceans drank Atlantis and the gleaming cities, and the years of the rise of the sons of Aryas, there was an age undreamed of, when shining kingdoms lay spread across the world like blue mantels beneath the stars. Hither came Conan the Cimmerian, black-haired and sullen-eyed, sword in hand, a thief, a reaver, a slayer, with giant melancholies and gigantic mirth, to tread the jeweled thrones of the Earth under his sandaled feet." The Nemedian Chronicles.

"And so it came to pass in the age of the technocrats that this mighty barbarian warrior fell in with the Silicon Wizards who enchanted him with weird spells and sent him on a mission in a land haunted by keyboards and video monitors..." The Silicon Chronicles.

Just how do you convert a muscle-bound man-monster into a bunch of sprites? Well, DataSoft have had a brave try at it and come up with an interesting and challenging platform/arcade Adventure game in the process.

If you've never heard of Conan the Barbarian - just where have you been? He is the star of numerous comic books, two feature films - and, of course, the books penned by fantasy author Robert E. Howard who originally created the character way back in the 1930s.

Now, at last, someone has come up with the first Conan computer game. As Conan, you must find and destroy the villainous Volta who is hiding somewhere inside a very strange castle.

You and Conan must fight your way through seven levels, packed with different foes and monsters - avoiding dangers by leaping, jumping and hacking away with your mighty broadsword. Luckily Cimmerians are well known for their athletic abilities.

The main object in each level is to find a mystic gem, place it in a gem holder and find the key to the next level. Some of those screens are very puzzling - believe me!

Conan is a real treat for games-starved Atari owners - and a good bet for C64 platform fans.

But if playing the game sparks off an interest in our barbarian hero - check out the paperbacks, read the comics and see the movies. You won't regret it!

A real treat for games-starved Atari owners - and a good bet for C64 platform fans.