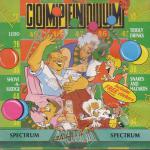 In a fit of generosity, Gremlin has provided Compendium, four games for the price of one.

Join the Wink family in four bouts of jolly jappery, and play Shove a Sledge, Tiddly Drinks, Christmas Ludo and Snakes and Hazards.

Compendium is, you may have guessed, slightly way out versions of traditional games. For instance. Tiddly Drinks has you catching not plastic counters, but empty pint glasses, thrown by the Father Wink. Snakes and Hazards gives you real snakes!

To be perfectly honest with you, I'm not a fan. I've always thought that the only real fun to be had as far as board games go is the cheating aspect. If you can't cheat like hell there's absolutely no point in playing them. And as the computer chooses how many you've thrown (no chance of nobbling the dice here) you're a bit stuck. There are certain things you can do though, that aren't entirely fair play. Snakes and Hazards allows you to throw things in your opponent's way. Present Victoria with a telephone, Ralph with a computer, Tiny Tim with a teddy, Sniffer the dog with a lampost, and they'll stay on that particular square until the next go, so some tactical cheating is almost called for.

But it's not the same is it, as setting fire to the dice? There's not an awful lot of cheating to be had in Ludo either. It's a question of playing the usual game, but avoiding Mum and Dad, this being Christmas Eve.

Shove a Sledge, I presume is a variation on Shove Ha'penny, but I'm not really old enough to remember that sort of thing. The game involves pushing Tiny Tim in his sledge, trying to stop the sledge in one of ten marked out squares. First player to land their sledge in all of the marked squares wins. I had twenty-seven goes at this game, and only landed the sledge in one box once.

Finally there's Tiddly Drinks. Father Wink will drink anything from 1-6 pints (there's nothing like moderation) and will then chuck the empty glasses for one member of his horrendous family to catch. Keep going till closing time and then the person who caught the most glasses is the winner.

I can't help feeling that all these games are much better left in their original forms. They don't gain anything from being on computer, apart from the obvious benefit of being able to play Ludo all by yourself if you're the sort of person without any friends.

Sadly there's not a lot that you can do to kiddies board games that will turn them into something special.

Rather bland collection of four well-known games. Computerising them seems to have added nothing to their already limited attraction.

A rather bland collection of four well-known games. Computerising them seems to have added nothing to their already limited attraction.