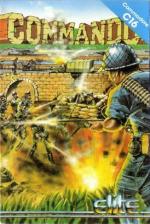 This game is based on the popular coin-op game by Capcom and subsequently converted to a number of machines by Elite. This is their latest conversion and is for the little C16.

The plot behind the game is that you play a crack commando, who is dropped behind enemy lines and has to battle through various screens of baddies. On the Commodore, the graphics are very good - on the C64 that is.

On the C16, the plot is there, but the graphics and the gameplay isn't. You move your man jerkily around the screen, and the enemy jerkily fire back.

You then move onto the next screen and the same happens again - although the scenery improves. This continues until you get to a kind of guard house - which, if going by the original, should lead to level 2.

Apart from the scenery changes from level to level with different problems to overcome in each section - like bridges to cross, etc. There is also a distinct lack of hand grenades - something you grow to like on the other versions.

Apart from a slight similarity in graphics and the same plot, this Commando is nothing like the other Commandos at all. And as the plot is pretty thin, and the C16 graphics are not much cop, this game should not be confused with the real Commando.

As a game in its own right, this is not bad for the C16. But you have to remember that most C16 software is around the £2-£3 mark, so perhaps this is too much to pay, and you would be better getting two or three other games instead.

Apart from a slight similarity in graphics and the same plot, this Commando is nothing like the other Commandos at all. But I suppose, as a game in its own right, this is not bad for the C16.