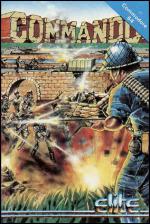 Elite's Commando is the licensed version of the classic Capcom arcade game which has captivated thousands of arcade gamers all over Britain.

The game places you in the role of a super crack commando with a mission to penetrate deep behind enemy lines and destroy their well-guarded fortress. This mission takes place over a vertically scrolling landscape and you, armed with a few grenades and a sub machine gun, have to take on the entire enemy army single handed.

There are boxes of grenades lying around the battlefield which you can pick up to replenish your stocks, but otherwise you just have to use skill, reflexes and sub machine gun to survive.

To reach the fortress you first have to pass through two areas, each with its own mini fortress at the end. When you take a mini fortress you are transported to the second area, and after that it's the final run up to the main fortress. If you take and destroy that then you start the second mission, which takes place over the same landscape and has to be completed in similar style, although the soldiers are far more hostile.

When you approach a fortress its doors open and loads of soldiers pour out, spewing bullets from their guns and lobbing grenades all over the shop. To take the fortress you have to destroy every soldier - not a trivial task by any means. When you've killed all the soldiers, your man automatically runs through the fortress gates, a message of congratulations is printed up on screen, and you are taken to the next area.

Each area has its own features and hazards. Level one is comparatively easy, but by the time you reach level three the going gets really tough, with lots of obstacles to thwart swift forward progress. Naturally, there are loads of enemy soldiers swarming all over the place, but luckily they're only armed with single shot rifles and grenades. Even so, their sheer numbers often becomes totally overpowering.

There are two specialist weapons used by enemy soldiers: bazookas and mortars. Mortar bombers don't pose too much of a threat, since they can only fire one pretty inaccurate shot at a time. Bazooka carriers, on the other hand, are deadly and fire round after round of lethal shells which explode in a large cloud of deadly flak.

The landscape is very barren - well, what do you expect for a desert? Dotted around are trees, little hills (usually the enemy come belting down their slopes) and rivers (there are always bridges to cross them - you might be a commando, but you can't swim)!

Area one is pretty deserted, with only a few trees and hills, although there is a bridge under which you have to go. The bridge is narrow and there's usually plenty of enemy soldiers just waiting to pounce on you on the other side. After the bridge there are rocks which the enemy use for cover and after these, the first mini fortress.

Area two is where things start getting tough. Foxholes filled with soldiers block your path, and the only way to kill the soldiers is by lobbing grenades on them. While you're trying to do that, they're busily trying to machine gun you down, just to make your life a misery. There are also another two bridges, one to go under and one to go over (it gets you across a river). Buildings and bunkers start to make an appearance too. Yet more soldiers pour from the buildings, while a fusillade of bullets comes from the bunkers.

The final run, area three, has all the hazards found in the earlier sections, only in far greater numbers. On this rush you're forced to cross an airport which has lookout towers, complete with machine gun wielding soldiers at the top. Great gangs of bazooka carriers make the going really tough - they emerge from each side of the screen and fire their shells diagonally, making them very difficult to dodge.

Points are awarded for disposing of enemy soldiers and vehicles and a hefty bonus can be earned by killing two guards who hold a colleague of yours prisoner. However, once you liberate your ally, he disappears, rather than helping you fight your battle.

I wouldn't have thought it possible to successfully reproduce the arcade game Commando on a mere Commodore 64. Elite obviously feel the same, since this official version doesn't look, sound, or play like the original. The graphics are good, but nothing outstanding. The scrolling backdrops are great, but some of the sprites seem prone to epileptic attacks and on occasions they even disappear! This proves extremely off-putting and makes the game very annoying to play. The music is the most impressive thing about Commando, with Rob Hubbard's excellent variation on the original theme to drive you on as you play. However, the sound effects are poor and complement the gameplay well. As it stands, this seems a very hurried conversion of the arcade game - a shame, as I'm sure Elite could have done better if they had put their collective minds to it.

Though supposedly a conversion of the arcade game Commando, Elite's version is woefully lacking five of the levels seen on the original. It wouldn't be so bad if the first three levels were a bit harder to complete, but since they don't even present that much challenge to me, doing the same thing again and again very quickly grows tedious. Graphically and in terms of execution, Commando is very competent indeed, but it just doesn't hold interest at all for me. Even so, many people may well enjoy it.

I must confess to being terribly disappointed with this. It's not the actual playability that's lacking, it's the number of levels - there are only three which are pretty easy to complete within a few games. Once you've gone round a few times, the whole game gets rather boring to play. All the features of levels one, two and four of the arcade machine have been faithfully reproduced with some very nice graphics, but really that's not enough. If you do love Commando and don't have a chance to play the real thing then obviously you've got no choice but to buy this, but really you should take a look at it first, because I don't think it has enough challenge to keep a hardened gamester occupied for long.

Graphics 83%
Smooth scrolling backdrops, but there are sometimes awful glitches.

Lastability 61%
... but doing it gets very repetitive.

Value For Money 72%
A tenner for only three out of eight levels of the arcade game seems a bit steep.

Overall 77%
Doesn't quite live up to its potential.

Scrolls well but doesn't quite live up to its potential due to some awful glitches... A tenner for only three out of eight levels of the arcade game seems a bit steep.