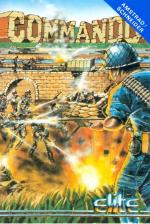 At last the "official" version of the arcade game has arrived, some time after its two imitators Who Dares Wins II and Rambo. The idea behind the game is simple - shoot everything that moves and if it doesn't move, shoot it anyway.

You control a character called Super Joe who has to fight a one man war against overwhelming enemy odds, using just a machine gun and hand grenades. The action takes place on a battlefield that scrolls down the screen as Joe makes his way up it. In fact, Joe can only advance though since the screen will not scroll upwards if he gets a sudden attack of cowardice.

Joe shoots in his direction of movement and can keep up a pretty heavy rate of fire, spraying bullets all over the screen. If the fire button is held down, he'll also throw grenades up the screen. The most effective fire pattern will take a while to perfect but once developed you have a pleasing ability to inflict death and mayhem.

The aim is to get through three areas of increasingly difficult opposition and destroy an enemy fortress at the end of it. On the way there are also two other smaller fortresses to be overcome. When Joe arrives at one the gates open and out pour masses of enemy soldiers from the fortress and from surrounding areas. Every single one has to be wiped out or got off the screen before Joe can progress to the next area. This isn't easy under very heavy fire from a large weight of numbers.

Another problem for Joe is that not only is he in danger from the enemies bullets and grenades, he also loses a life if he runs into a soldier - rotten at hand-to-hand combat, don't you know. On later stages things get really tough with bazooka launchers wandering around and fast accurate fire coming from soldiers in vehicles.

Joe has to keep on the move because the enemy fire is very accurate so that there is no time to rest and no safe spots to take a breather in. The enemy soldiers come at you from all sorts of positions: off the edge of the screen, behind rocks, out of caves, from the back of troop carriers and off hilltops. They may also shoot at you from trenches, pillboxes and mortar emplacements.

The only help you can get is from piles of hand grenades found lying around which cam be picked u$i to replenish your stock. These are most useful when blowing up vehicles though and not so good for close in-fighting with soldiers. When you die you restart from one of several different set positions, depending on how far you've gone.

There are plenty of different obstacles that appear on screen including rivers with bridges over them, tunnels under roadways, trees, trenches, rocks and walls. These are nicely drawn and that combines well with the smooth scrolling. The music that plays throughout the action also combines well with the shooting and grenade noises although after a while you may find it starts to get on your nerves.

The game is certainly one for the mindless blasters that will really test the reflexes and the muscles in your joystick hand. However it can become enormously frustrating because of the way you can so easily get killed after an awful lot of effort. This spoiled the game for me resulting in lots of expletives and physical violence. Who Dares Wins II had more of a strategic element to it that still gives it the edge - this is more mindless and hand cramping.

Amazingly mindless, totally frantic action - I love it! Gives your Amstrad a touch of the Schwarzenegers - and you'll need arms like old Arnie, too, just to cope with the punishing effort of all that blasting. Forget Who Dares Wins II, forget Bob Wade's opinion - this is what we want. And it's tough!

Doesn't lose a lot, but then Joe was green anyway.

The game is certainly one for the mindless blasters that will really test the reflexes and the muscles in your joystick hand.