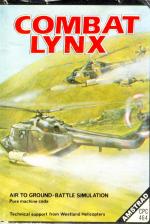 Let's get one thing straight before we go any further. This is an absolutely brilliant game. The fact that I am completely unable to play it is neither here nor there!

Combat Lynx is an incredibly detailed simulation of a war scenario in which you pilot a helicopter. The playing area is a vast simulated terrain (north and east coordinates are four-digit numbers), and located within it are from three to six bases which you have to support with troops and air cover.

Base 1 has an endless supply of fuel and can instantly cure any injured personnel you transport there (not too realistic, but without it you wouldn't stand a chance). The other bases depend on you to remain visible.

You constitute the only allied air support. The enemy seem to have almost unlimited aircraft to throw at you, and there is the added complication of ground vehicles, both Allied and enemy, which are involved in independent battles all over the map. Your mission, should you decide to accept it, is to ferry armed troops and casualties between the Allied bases as required, while maintaining sufficient weaponry on board to harass and destroy enemy craft. This is not easy!

Apart from some convenient fictions mentioned above, to mae the game actually playable, this is as close to real life as you can get. I seemed unable to shoot anything down, another glance at the instructions revealed that I had forgotten to load any weapons at the start of the game! None of this Space Invader infinite ammo rubbish here!

The game's graphics are superb. For example, while fitting out your Lynx, you are treated to a 3D perspective rotating wire frame view of the chopper.

The instrument panel is equally impressive, sporting a weapon status and selection system, navigation console, fuel gauge, engine instruments and altimeter. But the most mind-blowing thing of all is the cockpit view, which shows, in real time and full colour, the actual view as you fly over the terrain.

Hills and valleys rise and fall (their shape is accented by contour lines, a bit of poetic licence that actually adds to the realism), trees and houses appear as dots in the distance and stream past you out of sight, enemy planes flash across the field of view and over the horizon. I take my hat off to the programmer... this is a work of genius.

Sound isn't neglected, as there is the steady background beat of the rotor blades with a pitch depending on your flight speed, and explosions where necessary.

It's going to take you hours to master this game, just learning what the couple of dozen key options are takes some doing. You can use just the keyboard, keyboard and one joystick or keyboard and two joysticks, depending on how you prefer to control a game. If you want a game which presents a satisfying and difficult challenge that will take perseverance to master, put down the magazine this instant, and go buy Combat Lynx. You won't regret it.

I take my hat off to the programmer... this is a work of genius.