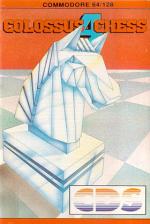 Quite a few issues ago (number three to be exact), we ran a feature called The Great Zzap! Chess Playoff where both Colossus Chess 2.0 and Mychess II battled together. Colossus hammered MyChess on the advanced level games, whilst on the low levels the opposite happened.

The latest version of this mighty chess program 'thinks' a lot faster than 2.0 and also has the added attraction of allowing play in very realistic and effective 3D, rather than the standard flat 'Sunday Times Chess puzzle' format.

Colossus comes with a large and informative manual which explains the general workings of the program along with all the options.

When you start a normal game, the first action is to set the level and decide whether you or the computer is going to take white. Moving a piece is done by using the cursor keys, joystick control, or through keyboard entry. When cursor keys or joystick are used, simply move the board cursor onto the piece that you want to move, press fire, then move the piece to its intended position and press fire again. With the keyboard, you can use the traditional algebraic notation (eg b4-b6). All moves are recorded for the taking of notes.

Colossus IV recognises all the usual rules of chess and also has a built in clock allowing you to play a tournament-style game. You can set the clock so each player has a time limit for every move. There is a useful option which forces the computer to match the time taken for your moves.

The program also has a wealth of options allowing you to practise or set up games. You can 'back-step' during a game if you make a mistake and wish to make that move again. The program has a self-play mode, so you can have a game against yourself without computer interference.

I find it very difficult to get enthusiastic over a chess program, but this is a real exception. What with the incredibly effective 3D board and its wealth of options, Colossus IV is the best chess implementation yet to hit the C64, and indeed possibly any home micro. The 'easy' levels offer a pretty good challenge, while harder levels require a grand master touch to get anywhere. If you want a chess program then look no further than this one.

If you want a chess program then look no further than this one.