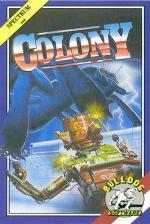 Man versus pest - the eternal battle for survival - threatens a far-off colony. It's a continual struggle to keep food supplies from being consumed by voracious creatures.

A fence is built to keep them from the human compound, but still they get through. A maintenance droid patrols the compound, consisting of seven storage and control buildings. Moving between all the buildings, and able to carry up to four items at a time, the droid's job is to fix fences, destroy pests that get in, harvest the crop and store it, and use the planet 's homing beacon for the safe arrival of supply ships. Fences are repaired with wire mesh, wood or barbed wire, all taken from their respective stores via an option screen, and carried to the damaged site. Anything removed from a store must be paid for.

Portable death traps can be used to block off galloping gourmet paths, but the creatures can be predatory, even lethal if the droid's shield energy is too low. It's equipped with a laser of limited charge, although time must be taken to recharge shield and laser levels in the droid charger room. Most operations use power, and if too much is consumed things switch off, use too little and the generator overloads. The compound's supply is expanded by increasing the number of solar panels, available from the general store.

Credits are awarded for harvesting crops, but to generate a future yield, seeds must be taken from the stores and planted on the compound's grassy sections. When the colony's supplies run low, more are ordered from Earth. The droid activates a homing beacon as the ship approaches, but the longer it's switched on, the more power is used. Even then, the job isn't over. The supplies must be unpacked from crates in the appropriate buildings - and all the while, the hungry horrors are breaking in through the fence.

'Colony is annoying, not just a little bit infuriating you understand, it's an Inducer of full blown 'screaming blue tearing out hair syndrome', and It's great - for a bit. Appeal will be short lived once you've memorised the map and discovered the various problems. After an afternoon's play I'd just about had enough of it, but I dare say I'll come back to it after a couple of weeks. For two quid you can't really go wrong.'

'After starting with the great Feud, I would have thought BULLDOG would know what a game needs to be appealing! Here the graphics are badly drawn, showing little thought of where the colour should be used, and character detection is mediocre. Colony is no fun to play at all. The game's idea is boring and repetitive, so its attraction wears off fast.'

'There is an element of playability here, but unfortunately the poor implementation means it has to struggle to make itself known. Resultingly. Colony isn't much of a fun game.'

Colony is no fun to play at all. The game's idea is boring and repetitive, so its attraction wears off fast.