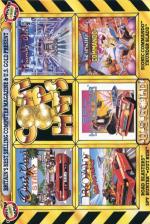 Sponsored by another well known games magazine, this is an 'all big name titles' compilation, and would seem like fairly good value for money (five games for £12.99) except, oh dear, half of them are crap. Let's take a gander...

Well, we gave it a Megagame last Christmas, but whatever can we have been thinking of? You're flying your helicopter gunship through a city centre on alternating vertically scrolling and into-the-screen 3D levels. Graphics and scrolling are as smooth, fast and clear as you could reasonably expect, but there's loads of multiloading, it's almost impossible to tell when you've been hit (making progress a pretty slapdash affair) and it all seems a bit too easy to complete. Rating: 75%

I love driving games normally (even bad ones) but this really isn't much fun. The graphics are perfectly well drawn, it's true, but where's the impression of speed, eh? Pretty snail-like at the best of times, it slows down to the speed of a three-toed sloth (when he's sleeping) for the tunnel sequences. Now it just looks a bit rubbish. Rating: 62%

Amazingly enough we never reviewed this when it first came in (or, at least, I can't find the issue it was in). I wonder why. Anyway, it's a Mad Max style road race game, rather like Outrun, only there are guns attached to the front of your car. There are add-on weapons to collect and lots of enemy cars to shoot, but generally it's uninspiring stuff. Rating: 60%

Aha! At last, a brilliant game! Megagamed a couple of year's back, Bionic Command might look a bit less polished now but it's as playable as ever. You control a little chap running around a large woodland platform and ladders landscape, shooting other little chaps. So far, so playable, but what really brings the game alive is the bionic robot arm thing he shoots out to swing on. A must! Rating: 87%

Well, this is a classic alright. There are loads of add-on weapons and it's reasonably fast (so you can't write it off entirely), but as so many of you must own it already I'm not quite sure what it's doing here. A bit of space filler, perhaps? Rating: 56%

So, all in all, fair value (as these things usually are) but there are more worthwhile compilations about.

Reasonable value as a compilation, but there are a couple of real dogs in here. Still, as always, you can't really complain at five games for 13 quid.

Reasonable value as a compilation, but there are a couple of real dogs in here.
Logout