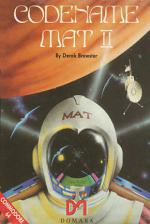 Codename Mat II, recently released on both the Spectrum and the Amstrad, is curiously misnamed on the Commodore seeing as how its predecessor, Codename Mat, never appealed on the 64.

The scenario casts you as Mat, champion of the good, defender of the innocent and scourge of the Myons. The Myons are an evil hunch of aliens set on destroying the energy collection grid based around the planet Vesta, a planet rich with the famed substance Karillium, the most precious substance in the known universe. Karillium is mega form of Baby Bio, one small pinch and a desert becomes a thriving jungle. Vesta's energy grid also happens to be Earth's most important power source.

The reason for the Myons' onslaught is that the planet Vesta was under their control until Earth launched an unmanned attack force and look it. Obviously a bit annoyed about the theft of such a valuable commodity, the Myons are now doing their best to disrupt the satellite grid distributing the Karillium power to Earth.

With tempers all round on the rise, you have been equipped with a new ship, the Centurion II, and sent to defend and repair the satellite network.

The object is to destroy the Myons' and guard the satellites. The Myons' attack in waves, of which there are eight. If you destroy all eight then they repeat themselves with an increased ferocity. All in all there are 256 levels before it cycles back to repeating itself. Mat is defending twenty four satellites and after clearing a wave of Myons there is a chance to repair them. You can also do any repair work necessary on the Centurion, but the time units allocated to the ship and satellites are limited.

The main action is viewed through the cockpit on the top half of the screen; here, any aliens in view plus the surrounding stars are seen. Using the joystick you can move up, down, left and right, for other ship controls the keyboard is relied upon. As you move, the starfield twirls about in true 3D style as in Elite. For travelling around in the immediate vicinity, there are information panels depicting the status of the ship on the bottom of the screen. The information shown is up to you and a number of different status screens can be called up.

To keep you up to date on the Myons' manoeuvres, three types of spanner are provided with varying intensities. The Quadrant Chart gives a view of the twenty four satellites and the damage status of each link in the energy grid. The Long and Short Range Charts are displayed simultaneously, both working along the same lines. Centurion is shown as a central dot viewed from above, and the Myon ships appear as moving dots. However, no information is given about the enemy's vertical position in relation to you and things can get confusing. When in battle, a semi-intelligent Battle Scanner can be called up. This tracks the alien nearest to you and also gives a reading of his range. During battle you can choose between photons or laser. The lasers fire blasts quickly one after the other but the photon weapon is a bit slow, on the other hand it won't blow up if overheated.

If your ship is damaged, it is possible to get it repaired by the two droids that come as standard fittings on Centurion. The trouble is they take their time in doing the simplest of jobs and if you're in battle they could well be destroyed. At any point it is possible to save out your current progress or load a previously saved game, though this may take a bit of time.

I have never really thought that much of the Star Raiders type of game, as I find them very banal and monotonous to play. Codename Mat II is no exception and while it seems a good, if unoriginal, variation on the theme I don't see much point in releasing something as uninspiring and 'cliched'. Graphically it is nothing special, with a rather poor and slow 'deep space' star effect and little else to impress. Even though the sound is limited to nothing more than a few spot effects, it is very good and suits the game well. Having said that, I think some title screen music would have livened things up no end. I'm not sure how popular the genre is with other game players, but Codename Mat II hasn't swayed my opinion in the slightest.

After seeing Codename Mat II on the Spectrum I just couldn't believe how similar if was on the 64. The same flickery graphics, the same snail's pace. There was, and I still can't wholly believe this, even attribute problems! The game scenario was extremely poor, of an even lower standard than a majority of the science fiction hokum contained on most games' inlays. Controlling the ship from the keyboard is asking the impossible given the keyboard layout Domark have provided. The direction keys are the same as the cursor keys on the Spectrum. I must admit to being bored by the whole thing with even the inexcusable badness of A View To A Kill seeming passable after this offering.

I've played so many of these type of games that playing yet another 'save the galaxy single handed' job really gets to me. It's not as if this one offers anything special - just the age old ingredients handed down from Star Raiders. The graphics and sound are both pretty poor and wading through the mass of instructions was almost like reading a familiar schoolbook. Fresh blood really needs to be injected into this type of game because as it stands it's very, very dull indeed.

Hookability 56%
Vast galaxy to explore and only a few Myons to shoot.

Value For Money 39%
Below average price ... and it shows.

Slow '3D' and unforgivable colour clash... A vast galaxy to explore but only a few Myons to shoot.