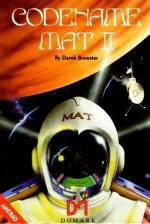 Codename Mat was an early best-seller on the Amstrad and this is an enhanced version with several extra features and some improved graphics. The action revolves around Mat as before, attempting to defend a planet's energy satellites against the Myon hordes.

The satellites are in four rows of six, making a grid of 24 sites to defend with your single craft. The screen is split into two sections, the top half showing your view out of the cockpit and the bottom half the instrument-status display. The view will only ever contain stars, the enemy, missiles and satellites and only needs to be watched during the heat of combat.

The quadrant chart appears in the bottom left of the screen and shows the status of the satellites, your position and the number and position of the enemy. When the Myons are in the same quadrant as a satellite they will gradually damage it until it is destroyed. You have to keep at least one of the rows complete in order to continue the game. While on the chart you can determine warp strength and direction (a compass heading) to engage the Myons. You can then warp, but before doing so should prepare for battle.

Shields are the most essential thing and should be up whenever in battle or warping. To help you remember this you should also put the safety mechanism on which will shut down overheating weapons and prevent you warping without shields. The targeting computer should also be on since this provides an on-screen sight that tells you when the enemy are within range.

Once in an enemy sector you need to put on the battle computer to tell you where the enemy are and how far away. This will appear in the bottom left of the screen in place of the quadrant chart. This area is also used for the long range and short range scans which can be used as alternatives to the battle computer since they provide a 3D indication of where objects (Myons or satellites) are.

Once you've closed in on an enemy you have a choice of two weapons plasma or laser bolts. These slide in and out of the nose of your ship, visible from the cockpit. Plasma are good for long range destruction while lasers are more effective close-in. The first wave of nasties are blue birds that flap across the view but like all the aliens explode into four brown chunks when hit.

The waves all take different characteristics with groups of one to five aliens in varying forms, one of which disconcertingly disappears for part of the time. Some waves don't shoot at you but take evasive action. Those that do shoot can cause damage to your systems and this is where a new dimension is brought into the game.

When a system is damaged you have to put one of two droids to work on repairing it. This is a lengthy process and while being repaired the system is out of action. There is another chance to repair things, though, at the end of each wave. Here you can repair or move satellites to fill gaps in rows, or repair your ship faster than usual. But this is only available for a limited number of turns. The end of the wave (or a life) is also where you are informed of how much the working satellites have boosted your score by.

This is certainly an improvement on the original Mat, with better combat graphics and more ship functions. There still isn't much out there in space but this war of attrition is pretty testing.

Deep-space games aren't usually my scene, but Codename Mat II had just enough 'alien termination' to keep me at it. It's far from being a great game - some of the Myons bear a striking resemblance to the Galaxians of yore and the weapons seem a little antiquated - but there's enough to do to keep you busy for a few light years.

P. Better graphics and features than the original.
P. Constant pressure from aliens and attending to systems.
P. Damage report and droids are nice features.
P. Not a matter of one hit and you're dead but a real long-term battle to stay alive.

N. 3D graphics still don't give much impression of movement.
N. Even with varied aliens it's still the same action for each sector.
N. Keeping track of all the controls can be difficult.

This is certainly an improvement on the original Codename Mat, with better combat graphics and more ship functions.