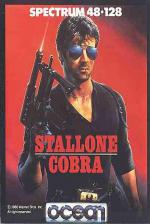 Crime is a disease. He's the cure. Oooh! So macho!!! All black T-shirt, match gripped between the teeth and have you seen his huge weapon...? He's so effective he should change his name to Penny Sillin (geddit?).

His real name's Marion (loss of the odd butch brownie point for that one, Sly, me old buddy) Cobretti - so you can understand why he prefers to be called... Cobra. Amateur psychologist that I am, I reckon that if he hadn't been born with such a sissy name he'd have had no need to prove himself by becoming a vigilante cop.

But if he'd copped out, there'd have been no game - the disease would have got worse: we'd all have been mugged and murdered and... well it doesn't bear thinking about. No, there's only one real solution to the crime problem and that's the short sharp shock of a bullet in the brain!

Look at it this way. You have to rescue top fashion model Rachael... sorry, Ingrid Knutsen (bit of wishful thinking there). The streets are overrun with psychotic killers. She's in the clutches of the evil Night Slasher (so that's why the bed's wet). Whatya gonna do? Try to talk them out of it, you pansy social worker? Of course not. You're going to kill them. Which is why this game doesn't have a fire button. It has a 'Murder' key!

Luckily the designers haven't taken the film quite so seriously as it took itself. In fact, they obviously reckoned it was a 'rot of old Cobras', as the Chinese would say. Stuck with the tie-in, they sent it up something rotten. And it's all the better for that.

Cobra is a variation on our old pal, Green Bert, so he's got lots of platforms to climb and weapons to collect as he wreaks havoc amongst the lowlife, scumball punks who're thrown against him. Unluckily for him, Marion starts out unarmed!

Never mind. He carries his own weaponry, hard as concrete and virtually undamageable - his head! Until he can pick up something more powerful he has to deliver a good ol' Glaswegian greeting to every enemy he meets. His H-Bomb headbutts are enough to knock the lowlife into the middle of next week.

The enemy just keeps on attacking though. Some even fire at him, which means he has to duck and leap a lot. They come thick (but never so thick as Sly himself) and fast, so naturally his mind turns to... fast food.

You can find a lot of things inside burgers, from the odd bit of beef to kangaroo meat, but I bet you never found a laser sighted machine gun in your McDonalds! Well, that's what lurks tooth-breakingly under these buns, so it's wise for Marion to pick up a pistol, nibble on a knife or imbibe an invincibility pill - with a side order of fries to go!

All the weapons have a limited life, but they're invaluable as you progress through the three stages. There's the city by night, the country by day, and the factory. It's in this last area you have to face that old wet, the Slasher. Still, as you have to clear each level of psychos before you progress, you've got your work cut out.

Another major difference from Green Bert is that you don't just run left to right. In fact, you have to do rather a lot of running every which way but loose (sorry, wrong movie) if you're to pick up the goodies and find Ingrid. She'll follow you faithfully, impressed by your rippling biceps and bulging belly (too many burgers!). But don't commit that cardinal faux pas of courting and try to kill her or she'll wander off again. That sort of thing really hurts a girl.

Sure, Cobra isn't very original, but it's furious fun which will test you to the limits. It's also one of the better film-linked titles. In a market which has become constipated with tie-ins, Cobra is a dose of syrup of figs!

Sure, Cobra isn't very original, but it's furious fun which will test you to the limits. It's also one of the better film-linked titles.