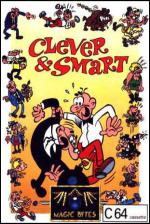 In the latest game from German software house Magic Bytes, a solo player directs the two eponymous detectives around town in search of the missing scientist, Dr. Bacterius.

The town is viewed from above, and is displayed as a four-way scrolling maze of streets, houses, trees and shops. Clever and Smart run through the streets in tandem, examining people, objects and buildings in order to obtain information about the mission professor.

A complex sewage system runs beneath the town, and the pair can enter the labyrinth from gratings on the surface. The underground tunnel network holds distribution boxes where, if they have the correct equipment, the twosome can listed in on people's telephone conversations.

A number of sub-games also appear within the main plot, enabling the duo to obtain money for food, disguises and equipment to aid their quest. These include snail-racing (an abstract betting game-cum-joystick waggler), coin throwing, signature forging, cable mending, and bomb defusion.

Only two lives are provided during the game - one for each character - and are lost either through terminal hunder, which is aggravated by being beaten up by 'heavies', or on collision with cars that appear at intervals. However, hunger may be fended off by frequent visits to one of the Chinese takeaways.

It's very difficult to translate jokes from one language to another and Clever And Smart painfully illustrates the fact. It might be side-splitting funny in German, but in incredibly badly translated English, it's obscure and arcane.

Playability is almost zero, due partly to the totally confusing plot, and the pathetic instructions and boring gameplay only serve to make things worse. Wandering around the town is a frequently fruitless occupation, since it takes ages to find anything and even longer to actually work out how to use it.

A couple of sessions was all I could stomach before switching the computer off.

German programmers seem to operate on a totally different wavelength to everyone else, judging from the efforts we have received this month. Clever And Smart is by war the weirdest: the whole game appears to be a German in-joke, filled with obscure statements and unusual references - examining telephone boxes is often rewarded with 'Beware! Bomb-throwers!'

Hmmmm. Prudish people should also beware the bad language which advises Grandma to go forth and multiply!

My major gripe is that cars are almost impossible to avoid, and since there are only two lives to play with, a game is often over very quickly. Forget it.

The package gets off to a poor start with some appalling instructions, which aren't only badly translated from the German, but also fail to explain much about the gameplay!

Then the game itself begins, with a couple of jerky, badly animated characters bumping their way around the screen.

Once you've worked out all the controls and what it is you're actually trying to achieve, you realise that there's nothing to sustain interest.

The sub-games are primitive and seem to bear little relation to the main objective, and the remnants of German phrases and the obscene messages that crop up occasionally are just signs of amateurism.

I have to advise you not to bother with this. It's just badly-produced rubbish.

Graphics 45%
Bland throughout, with blocky sprites and unimaginative backdrops.

Hookability 38%
The distinct lack of immediate action, and the confusing gameplay, leads to initial disinterest.

Lastability 25%
There's nothing to excite, and the urge to return is minimal.

Don't bother. The sub-games are primitive and seem to bear little relation to the main objective, and the remnants of German phrases and the obscene messages that crop up occasionally are just signs of amateurism. Badly-produced rubbish.