Published in The Micro User 4.01 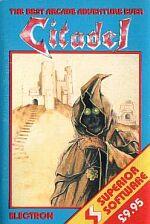 There are now so many games available for the BBC Micro that we are becoming rather spoiled for choice. Just occasionally, however, a real beauty comes along, and for me Citadel, from Superior Software, is one of these.

Citadel is a role-playing quest game. A particularly evil dic tator has made his base in an old castle and built a teleport system there.

It will be used to transport his invasion force of aliens, and your job is to destroy it. To do this you have to find five crystals hidden in various locations in the castle and its surrounding lands.

Sounds very like a traditional adventure - but now for the arcade bit. One room at a time is shown on screen, complete with your hero. You have to guide him round, up ladders, down ropes, leaping over fires by using conventional control keys Z/X for left/right, and so on.

Move out of the room in any direction and the next room flashes up instantly. Useful objects lying around can be picked up, and a lot of extremely nasty creatures have to be avoided or zapped with a spell. You need to be pretty quick with the control keys here.

Citadel is great fun, and you have to play the game to appreciate it. I've spent four weeks playing nothing else, and still only solved half the puzzles.

Not only is it very enjoyable, it's also very difficult.

For me, it's almost the perfect game. You need arcade skill to move your hero around the castle safely. You need logic to work out the purpose of the various objects.

The game is well propgrammed, with excellent graphics and sound. In fact, while loading it even tells you what its name is - yes, a little speech synthesis. Scared the life out of me the first time it did that.

The game is well programmed, with excellent graphics and sound.