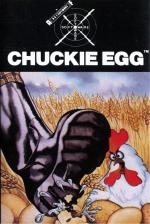 Infamous, nerve-jangling egg harvest originally released for the Spectrum and now made available for a range of popular micros. Surprisingly it's not Hobbit-like sophistication or state of the art graphics that has made it so popular. It's the sheer inaccessibility of the thing!

It's been thoughtfully designed so that only the most dedicated gamester will make any headway into the later screens. Us passing players stand no chance. We can only thow up out hands and wail, "The lifts! The lifts! Eeeaarrghh!" What's worse, the thing insists on bleating out the tune of The Birdie Song as you go along.

It's enough to make you climb off your trolley. Newcomers could be warned that the game's rep is well founded and consequently delicate types are advised to approach with extreme caution.

Thoughtfully designed so that only the most dedicated gamester will make any headway into the later screens.