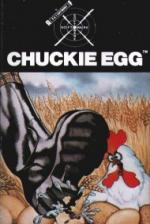 Chuckle Egg is an excellent game available for three different machines. The BBC version has better graphics than the others, but the Spectrum and Dragon versions are quite acceptable.

The screen is divided into levels joined by ladders and is patrolled by three ducks who move up and down the ladders in search of piles of corn which they then consume.

You control a little man whose task is to collect a number of golden eggs as quickly as possible. and preferably before the ducks have polished off all the corn.

Once you have cleared the screen you get a bonus depending on how much corn you have managed to save. There is also a time limit and ignoring it costs you one of your five lives.

There are eight screens and the further you progress the more complex the screen layout becomes, with moving platforms, ladders going nowhere and eggs hovering mysteriously in mid-air.

Oh, and I forgot to tell you, the ducks may look cute, but they kill on contact.

There is no joystick option on this game, but ten marks out of ten to A&F Software for allowing you to choose your own movement keys. Not all the keys are available, and forbidden keys will vary from machine to machine, but this facility adds greatly to the enjoyment of the game. If only other software houses would follow this example...

Chuckle Egg is simple, highly addictive, and great fun to play. Easy enough for kids and compulsive enough for adults, it's worth every penny!