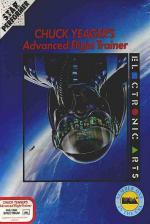 Apart from an instruction booklet that's as big as a Jeffrey Archer novel, but infinitely better written, the first thing you encounter in this game is the line about Chuck's AFT being 'designed for advanced pilots who already know how to fly a plane'! This is a warning on the complexity of the game, so don't expect to pick Chuck Yeager up (Oo-er!) and get straight into it. It's the sort of game that requires a lot of practice to master.

Don't be put off by first appearances either. The loading screen is a nice digitised piccie of Chuck himself, but with a big yellow sticker over his mouth and nose! Why would anyone want to smother Chuck in such a fashion? I'll tell you why! Because he is so annoying. Each time you make a tiny error (Like ploughing a field with the nose of your F-18!) he says things like 'You sure bought the farm that time!' and "Nice auger-job'. What is this man talking about?

The graphics on occasion cause optical discomfort and the scrolling is a trifle jerky. The ground is purple and the sky is black. (And they went to sea in a sieve? Ed) When you see your plane from behind against the ground (Yes, you can. I'll explain later!), the clashing pixels make your eyes go wibbly! (This having been said, there is some nicely filled ground detail.) But stick with it, unless you posess a 48K Speccy. If this is the case, then be warned - Chuck is a mere shadow of his former self! When copped from its 16 bit original to 128K, the game is still very big and offers some nice original options. These include the ability to view your aircraft from behind (the chase planes viewpoint) and from the ground (the Control Tower's viewpoint), the choice of flying one of 14 different aircraft (from a 1918 Sopwith Camel to the latest USAF aquisitions such as the F-18 Hornet and the SR-71 Blackbird), and also the option to fly a 'Test Flight', 'Formation Flying', 'Airplane Racing', or 'Flight instruction. Furthermore, within each of these choices, there are even more sub-choices!! In Formation Flying, there is an invitation from General Chuck himself to 'Wax Me' (Good Lord!! Ed). This, in fact, is where you get to chase Chuck in a P-51 Mustang!

Sorry, I digress, back to the 48K version. This version has been chopped so much that you are only able to opt for Test Flights. Furthermore, unlike the 16 bit formats, both versions have lost the 'Direction Finding Radio', a helpful device to help you locate your airport! This makes landing very much a hit and miss affair. Anyway, having mastered the principles of flight (hem, hem) then you can get into the main part of this game, which is the test flights, the racing and the aerobatics. Racing, against another plane, is great fun. The courses send you slaloming around obstacles, or through narrow gates. Testing planes too is thrilling, with Chuck's handy tips and his checklist.

For 128K flight sim fans and people interested in flying this could be well entertaining. For the remainder - a tad dodgy, overly complex and difficult to master.

For 128K flight sim fans, and people interested in flying, this could be well entertaining. For the remainder - a tad dodgy, overly complex and difficult to master.