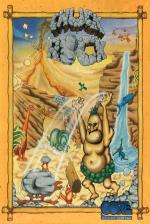 With a chin Judge Dredd would be proud of, and only a loincloth to cover his modesty, Chuck Rock has arrived on the C64. Because of his resemblance to a Neanderthal native, Mark "Belly-Butt" Caswell has been sent back in time to help our caveman hero.

Quite how the beer-bellied caveman named Chuck Rock won the hand of the fair Ophelia, no one will ever know. Some say it was in a game of 'blind man club', but now disaster has struck (as it does). Ophelia has been kidnapped by the despicable Garry Gnaw. So it's up to Chuck to travel through many peril-filled levels and rescue the girl he loves (well, smacked over the head with his club - same thing). Our stubble-jawed hero certainly lives up to his name when defending himself: he either belly-butts attackers or chucks rocks at 'em (if they're to hand).

Contact with the diabolical, despicable dinosaur villains loses Chuck a bit of his energy (the heart in the bottom-left corner of the screen). But fear not, 'coz help is at hand in the guise of heart-shaped icons. Also, food is available to boost the player's feeble score (but not, as I initially thought, to replace energy). Even though the reign of the dinosaur ended 65 million years ago, there are certainly a lot of them in Chuck Rock. They include pterodactyls, swamp creatures, giant insects and loadsa dinky dinosaur swines who are all trying to pop our prehistoric pal's clogs.

Much of the action takes place on platforms; some Chuck can easily reach while others need a bit of thought. Sometimes the stacking of rocks helps Chuck out of a predicament, other times a dinosaur pal helps out. Crocodiles act as springboards; brontosaurs and whales carry Chuck across water, while pterodactyls act as prehistoric airplanes. Once Chuck has belly-butted, stoned and generally splatted the dinosaur... erm, desperados, he faces the end-of-level guardian. First up is a triceratops, who likes nothing more than charging at Chuck while blowing a big raspberry.

Once ol' three-horns is dead, many trials and tribulations still stand between Chuck and his sweetheart. So bulge that belly and go for it - Ophelia awaits.

The first thing that strikes you upon loading is the brilliantly animated intro sequence, starring the Chuck Rock Band. The game itself is no duffer either, Chuck is the epitome of manhood (not) as he strides (slouches) around the levels kicking (and belly-butting) ass. Many of the creatures are so cute they don't look as if they deserve a good hiding. But they do, and I can assure you Chuck Rock will be on your C64 till the brontosaurs come home. Both platform and bash-'em-up freaks are well catered for. It's a classic and no mistake, madam.

Chuck Rock isn't just a pretty face... erm, what I mean is that the action matches the graphics. The latter are excellent with the amusingly animated cartoon sprites simply oozing character. Of course, Chuck himself is the star of the show with his rock chucking and superb belly-butt - the most amusing method of attack I've ever seen in a computer game! When he's carrying a rock Chuck can't jump as high, so sometimes you need to chuck rocks up ahead of you, follow them, then use them as a jumping platform to reach a higher level.

Similarly, rocks can be used as stepping stones to cross water - but be quick 'coz they slowly sink! Elsewhere there are friendly pterodactyls and brontosaurs to carry you, and I just love the crocodile - drop a rock on his head and his tail springs up, propelling you high into the air! Like other classic cutesy games (The New Zealand Story especially) the pleasure of playing Chuck Rock doesn't just lie in trying to complete it - you'll have a good ol' belly laugh in the process.

Hookability 95%
It instantly grabs you by the loincloth! (Ouch!)

The pleasure of playing Chuck Rock doesn't just lie in trying to complete it - you'll have a good ol' belly laugh in the process.