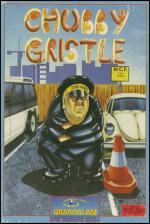 When the Amiga version of Chubby Gristle arrived, the whole office stopped in amazement. Not at the game mind you, but at the increasingly realistic speech: "Ye can't park 'ere", it says in a distinctly northern voice. "'Ave a word wi' commissioner". However, without the speech the game is really dull, especially the Spectrum version...

The aim is simple: blubberman Chubby makes his way across thirteen levels of platforms, ladders, lava pits and steams in order to get home to Mrs G. and make little Gristlets.

Each screen has Monty-esque decor, comprised of the usual pot-pourri of brickwork, platforms, pillars and posts, interspersed with patterned areas for a bit of variety. However, they're neatly drawn and a lot less garish than many games of this type.

Chubby meets a selection of beings along the route, most of which are to be avoided since their touch is fatal to each of Chubby's four lives. Similarly, falling large distances results in a thinner Gristle and the removal of a life.

There are various objects scattered throughout the landscape which are collected for various effects: flashing food boosts Chubby's weight and score; objects such as money bags, coins and tools are collected for extra points; and a number of items are necessary for the completion of certain screens. For instance, the flowing stream can only be negotiated once a pair of wellington boots have been retrieved...

Released across all formats, Chubby Gristle has the added advantage of some excellent digitised speech on the larger machines. The Spectrum version is not afforded this luxury, and has to rely on gameplay to provide its entertainment value - an unfortunate occurrence since it doesn't really have that much to offer.

In fact, Chubby Gristle has some very annoying faults: both the character and sprite collision detection is a bit lacking, allowing Chubby to fall through the edge of a platform and get bumped off by the nasties, even when they aren't touching.

Also, death sends Chubby back to the exit of the last screen rather than placing him near to where his demise occured. Once it even went further, sending him back to the screen before that. I was not impressed.

With a price tag of nearly nine quid, I'd expect a little more for my money than the archaic and unoriginal platform action on offer here.

With a price tag of nearly nine quid, I'd expect a little more for my money than the archaic and unoriginal platform action on offer here.