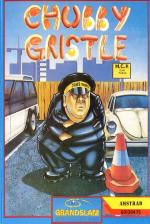 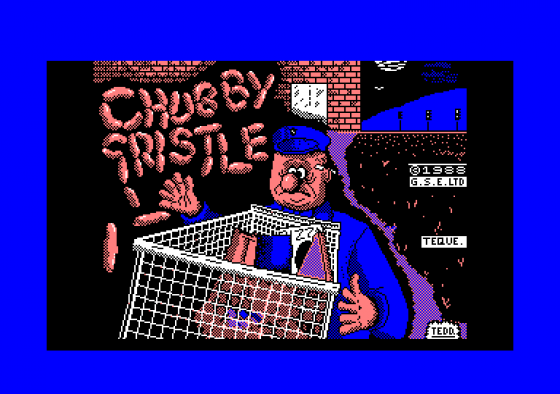 A grossly tat car park attendant. Chubby Grist.e lives to eat and be nasty. His ultimate ambition, which you car. help him realise by playing this game, is to weigh in at a ton.

The screen has a small panel in which lives (four to begin with), score and weight are displayed. The rest is taken up by a series of platforms. You're reminded of Jet Set Willy, and the similarities extend beyond appearances and into gameplay too.

Littered around the screens are objects you can eat to build up your weight, and some others that may come in useful later on. The platforms have gaps between them with ladders, ropes and lifts provided for you to move between floors. Watch out, however, for things that move around the screen and can kill at a touch. Some stationary objects are likewise deadly. 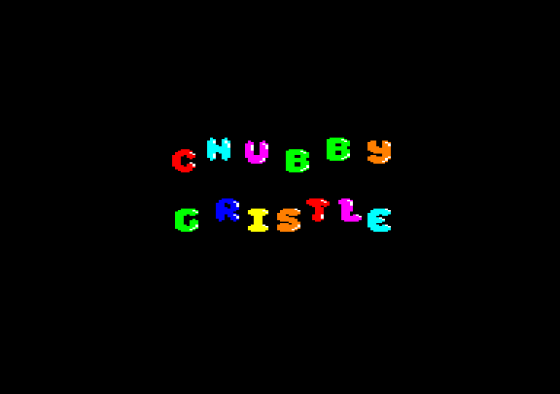 As with virtually every other platform game you ever saw, you get a continuous tune while you play. Beethoven it ain't, but I have heard worse. Graphics are small, but colour is used well and animation is simplistic.

Chubby Gristle is hardly state of the art. Platform games have been around for Donkey Kong's years and this one has little new to offer.

If you still find platform games enjoyable - if you have a platform soul! - then you'll find plenty of timing problems and tricky positions to get out of before you complete the game. 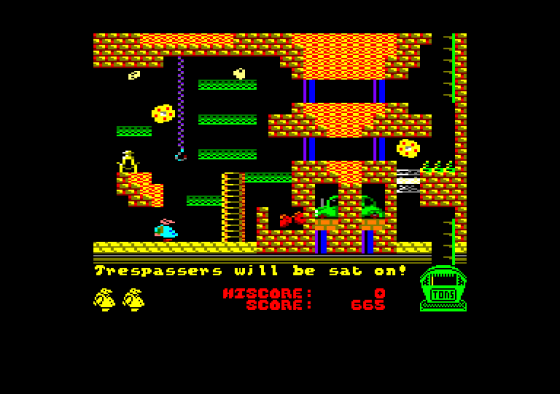 Once upon a time there was Miner 49'er, then there was Donkey Kong, Lode Runner, Manic Miner, Jet Set Willy... Now there's Chubby Gristle. If you think fat is funny you'll hoot, but if you're after something a little more original you'll probably give this a miss. It depends on what your collection of platform games is like.

At budget price, this would be a neat little game, but £9 on tape and £15 on disk? Come off it, Grandslam!

Graphics 57%
P. Colour is used well.
N. Sprites are on the small size.

Grab Factor 57%
P. Easy enough to just pick up a joystick and play.
N. Frustrating if you get a situation where you can do nothing to avoid losing a life.

Staying Power 63%
P. Some tricky problems to solve.
N. Only 20 screens to complete - not many as platform games go.

If you think fat is funny you'll hoot, but if you're after something a little more original you'll probably give this a miss. 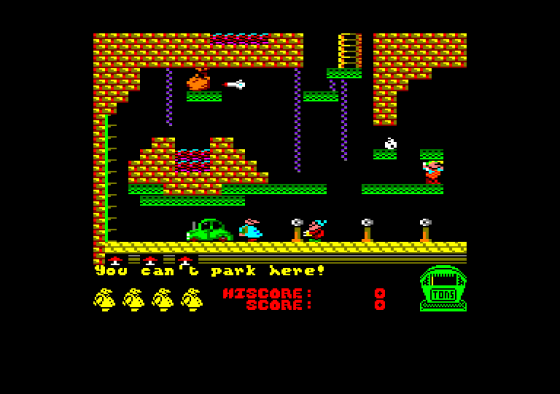