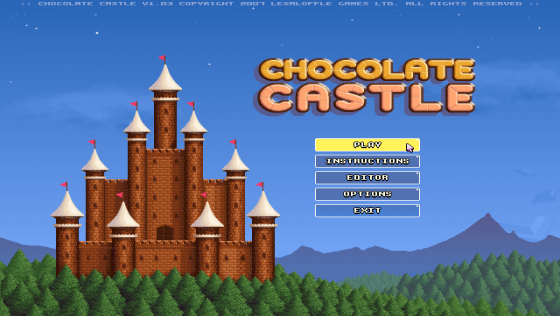 An original puzzle release? What, you mean it's not a casual match-three title? Don't be fooled by the oh-so-cute presentation - Chocolate Castle is a game that separates the men from the boys...

Lexaloffle's Chocolate Castle is a truly unique puzzle game, comprised of many recognisable elements from other titles but mixed and flipped together to create something that's both fresh, intriguing, original and yet familiar in concept. With it's cute 16-bit style pixel art and chip music you could be easily be mistaken in thinking that Chocolate Castle is a game aimed solely at the pre-teens market - however, rest assured that beneath the child-friendly presentation lies a fiendishly difficult and well designed puzzler guaranteed to give even top-IQ Mensans a headache.

The aim of the game is simple; the player must clear each of the 120 rooms of the castle of chocolate, feeding each of the four types (dark, milk, white and err, pink) to the correspondingly coloured animal (dog, bear, rabbit and pig). The catch is that each animal will disappear after eating a lump of chocolate, so you have to manoeuvre the sugary treats on each screen so that all the blocks of the same colour are joined together before feeding it to your animal. It sounds simple (and on the easy levels it is), but the later screens require a lot of forward planning to clear. Add to this combination moveable (and non-edible) blocks that get in your way, walls, slippery ice, magic blocks that can only be moved once, snakes (which are essentially long, bendy walls that can be dragged around by their 'heads'), cats and highly explosive Turkish Delight - and you end up with a puzzle game that really stands out from the casual crowd.

The game is fairly well balanced, with the full version featuring 40 easy rooms that act as an introduction to the game's mechanics, 40 medium difficulty rooms (that I personally found to be the most enjoyable), followed by 40 difficult, and I mean really difficult puzzles. However, on the medium setting some screens still seemed surprisingly easy compared with the rooms either side, and on several occasions I distinctly felt as though I'd completed the level in a way that wasn't actually planned by the designer. 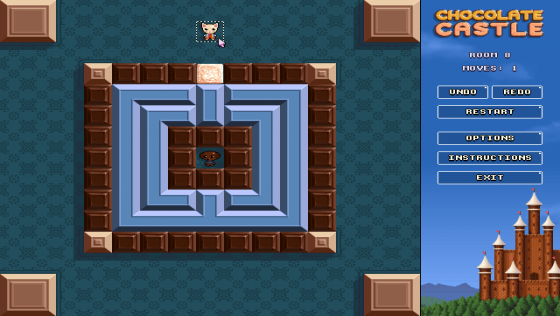 Presentation is clean, consistent and concise throughout, with a congratulatory onscreen display of balloons and bursts of confetti when you successfully complete a room (together with a flourish of suitably chirpy music) - a theme that is continued when you return to the main menu, where you can see the window of the room just completed lit up and the celebrations ongoing. These small touches (not forgetting the minimal yet endearing animation of the little animals) really add polish to an already solid game - in fact my only criticism of Chocolate Castle is that it would have been nice to see a few more of these additions - the lack of in-game music and proper customisable player profiles is a real shame.

However, thanks to the well designed and easy to use built-in editor, excellent online support and an enthusiastic (yet small) community with whom to swap user puzzles, the $20/£10 price tag is more than fair and you really get a lot of game-play hours for your money. The small download size (less than one megabyte) and family friendly feel result in a shareware title that is instantly accessible to all ages.

In conclusion, Chocolate Castle is a great little puzzle game that's both original in concept and fun to play, and which would have been a massive hit if released on a 16/8-bit computer back in the early 90's. Some people will argue that the price is too high for such a small package, but they are really missing the point; the design that went into this title is worth the $20 fee alone, and it's really refreshing to play a casual, simple puzzle game that doesn't involve match-three mechanics. With future game releases planned and a high-quality back catalogue of titles, Lexaloffle is a developer to keep an eye on.

RGCD is retro, but there are different types of retro. There is 'Retro' - the original classics, There is 'New Retro' - new games created for classic machines, and then there is 'Neuveau Retro' - those games that are new, but want to be old.

Chocolate Castle is definitely in the latter category and was most likely written by a sick teen, who got that way from being bit sometime in the 90's. For those who don't get my cryptic gibbering, I will put it another way... This game is the most 16-bit game never to come out of Sixteen-Bit City on the planet Amiga. The game looks and more importantly feels like it belongs on a 3.5" inch disk with a slightly yellowing label.

It's cutesy style and simple premise make it easy to get into, but don't be fooled. This game is a bitch. A sugary, fluffy, chocolate coated bitch, but a bitch all the same. I am not the most lateral of thinkers and I wasn't very many levels in when I first started hurling obscenities at the cute little bunny wabbit and it all went downhill from there.

Chocolate Castle is a nice game that's both well made and cleverly presented, but I don't think that I personally have enough patience to get my 20 dollars worth.

A nice game that's both well made and cleverly presented, but I don't think that I personally have enough patience to get my 20 dollars worth. 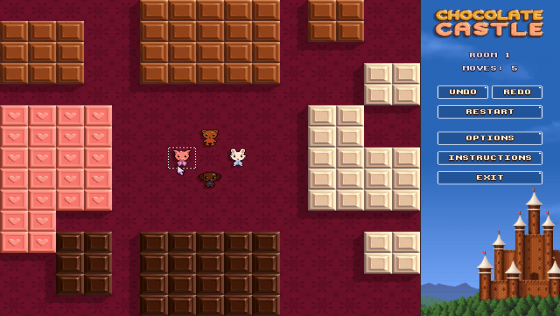 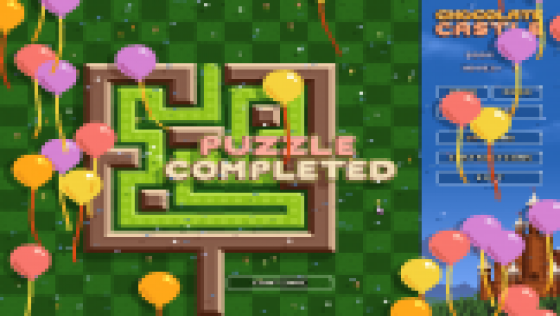